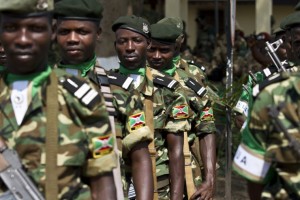 At least 9 people are reported to have been killed in a wave of violence in Bangui, the capital of Central African Republic, on Wednesday 25th, December.

Spokesman for the African Union Mission in Central Africa (MISCA) Elio Yao told Reuters that about 5 Chadian peacekeeping forces were killed and about 15 wounded on Wednesday morning in clashes with Christian anti-balaka rebels in Gabongo neighbourhood, Bangui.

Another Chadian soldier is reported to have passed on while receiving treatment later in the day, bringing the death toll to 6.

Bangui has been plagued with violence since the beginning of the month, despite the presence of MISCA and French peacekeeping forces. Residents say gunfire echoed almost continuously in the air on Christmas day, forcing many to stay indoors.

Today, the burnt vehicle and charred remains of at least one of the Chadian soldiers killed in the battle yesterday is reported to still be in the street–underscoring the high level of security threat civilians and peacekeepers alike are under.

Christian anti-balaka rebels, loyal to ousted President Francois Bozize, accuse Chadian peacekeepers of supporting Seleka rebels, who were behind the overthrow of Bozize.

Clashes between the anti-balaka and Seleka rebels since the overthrow of Bozize in March have resulted in the death of hundreds and the displacement of thousands.

Authorities say up to 20,000 civilians are seeking refuge in the Bangui International Airport, where French forces took up position on Wednesday following continuous fighting in the city. MISCA and French troops are also reported to have been deployed to other areas in Bangui where fighting have been reported in the past week.

A semblance of normality returned to the streets of Bangui in the days leading up to Christmas in the predominantly Christian nation–with Christmas lights in the air and gifts up for sale.

But this normality was fragile, as reports of violence on the 25th have confirmed.

In another incident on the same day, at least 4 people were killed in a Church by unidentified gunmen suspected to be Seleka rebels, according to a report by VOA.

Father Anicet Ossiboyen Senganammbi, leader of the parish, told reporters that the deadly incident occurred moments before their Christmas service.

This comes after Chadian troops notoriously clashed with Burundian peacekeepers and CAR protesters earlier in the week.

On Monday 23rd, Chadian troops are reported to have opened fire on a group of stone-wielding Christian protesters outside the Bangui airport.

At least one person is reported to have been killed and over 40 injured in the clash, which highlights the growing distrust between CAR’s Christian population and Chad’s mainly Muslim peacekeeping troops who are accused of supporting rogue-Seleka rebels.

In light of the effects of this tense situation on peacekeeping efforts, MISCA spokesperson Lieutenant Colonel Ndong Toutoune told AFP that “The whole Chadian contingent will be sent to secure the north in the next few days.”

MISCA commanding officer Gen. Martin Tumenta Chomu of Cameroon has also confirmed that the Chadian troops will be re-deployed to the north of CAR.

Also on Monday 23rd, in one of the most bizarre circumstances, Chadian peacekeeping troops are reported to have attacked Burundian troops who were attempting to disarm a group of ex-Seleka rebels.

Lieutenant Colonel Pontien Hakizamana, head of the Burundian troops in CAR told AFP that his men had routed a group of armed ex-Seleka rebel on Monday morning and were in the process of disarming them when a small group of Chadian soldiers attacked them.

According to him, they threw a grenade at his troops and opened fire on them, forcing them to retaliate.

“Then the Chadians left with the ex-Seleka, firing in all directions,” the Lt Col Hakizamana revealed, adding that at least 3 Chadian troops sustained gun shot wounds from the incident.

He revealed that later in the day Chadian troops again attacked his men, but they were easily repelled.

Lt Col Hakizamana insist his men “are very disciplined and battle-tested and have nothing to do with yesterday’s incidents.

“We have no dispute with any part of the Central African population,” he said.

Chad, which has seen its fair share of civil war, is contributing the largest percentage of peacekeeping troops to restore law and order to its neighbour, CAR. Out of the 3,700 MISCA troops currently reported to be in CAR, over 800 are from Chad.

Pundits say the gravity of the recent violent episodes increases in light of the fact that Chad has been one of the most important partners in bringing stability to the war torn CAR.

Chadian authorities are yet to comment on the recent incidents. But experts say the directive to take control of Bangui from Chadian troops and hand it over to the Burundian troops is likely to widen the division between the two groups.

A nation divided by religion and politics
Although it was not initially the case, the violence in CAR is increasingly being tied to religion.

The present armed conflict follows a coup d’etat by Seleka rebels on President Francois Bozize in March, after he was accused of corruption, dictatorship and not fulfilling his promises to the people.

Ex-President Francois Bozize, who organized the second elections in the history of CAR in 2005 (which he won) after taking power through a coup from Ange-Felix Patasse in 2003, has been accused of seeking to topple the current regime through the anti-balaka (or anti-matchete) rebels.

Michel Djotodia, interim President of CAR and ex-Seleka leader says Bozize is orchestrating the sectarian violence in the nation that has left hundreds dead in the past few months.

President Djotodia on September 13th revealed that the Seleka coalition, which brought him to power, had been dissolved. Following this announcement, some of the rebels joined the army, while others formed themselves into groups that went on a mass killing spree in the nation, forcing the international community to intervene.

Earlier in the month, Erastus Mwencha, deputy chairman of the African Union revealed that the organization was considering increasing the amount of soldiers in CAR to 5,000. The United Nations Security Council had agreed for the number of troops to be increased to 3,500, but the AU’s deputy chairman says the organization have come to the conclusion that more soldiers will be needed following the increase in sectarian violence in the nation.

Mwencha recently told Reuters that the AU has been “very active” in the Central African Republic since March, “setting up a process to bring them back to constitutionality, and also making arrangements for transition to elections.”

France, the former colonist of CAR, is reported to have also deployed 1,600 soldiers to assist MISCA and Chadian troops restore order to the deeply impoverished nation, which is also rich in natural resources. Meanwhile, the U.S., U.K, Poland, Germany, Spain and Belgium are reported to be providing logistical support to peace keeping operations in CAR.

Having been plagued with dictators and internal strife since its independence in 1960, many citizens of CAR insist this conflict is not inspired by religious division, instead they say it is a political war that is taking on a religious appearance.

On the other hand, many of the anti-baraka fighters are Christians from Bangui, who formed the militant group to protect themselves after the fall of the legal government earlier in the year.

Several Christian and Muslim religious leaders have come together to dispel claims that the conflict in Bangui is fuelled by religious differences.

The Archbishop of Bangui, Diedonne Nzapalainga, told VOA that “To non-Muslims, Muslims now equals Seleka and Seleka equals Muslims.” He insists that “this conflict was not a religious conflict but a political one.”

On Tuesday, President Djotodia delivered a speech on national television in which he urged his people to “Love each other.”

“You can find that in the Bible and the Koran,” he added.

AU spokesman Eloi Yao today revealed that violence has reduced in Bangui since MISCA and French forces took over responsibility of the city’s security from Chadian forces on December 19th.

Speaking on a recent joint statement issued by CAR’s interim President Michel Djotodia, Prime Minister Nicolas Tiangaye and several religious leaders in the country, Mr Yao said “I think it was a very positive gesture seeing all the leaders together; the prime minister of the transition, the president and all the religious leaders together emphasizing the message of national unity, and [calling] for peace…” according to a report by VOA.

Officials say MISCA and French troops are working with civilians to get rid of the rebels and restore peace and the rule of law to Bangui and other states in the nation.

Photo: Burundian soldiers in Bangui during a ceremony to mark the transfer of power to MISCA, December 19th. [Ivan Lieman/AFP/Getty Images]