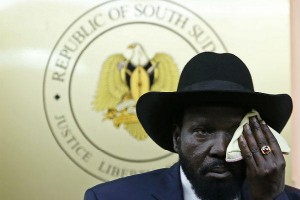 South Sudan’s army said it had lost control of the flash-point town of Bor on Wednesday, its first acknowledged reversal in three days of clashes between rival groups of soldiers that have triggered warnings of a slide into civil war fueled by ethnic division.

President Salva Kiir earlier said he was ready for dialogue with his ex-vice president Riek Machar – the man he accuses of starting the fighting, which diplomats say has killed up to 500 people, and plotting a coup.

But Machar has denied involvement in the attempted plot to topple the regime. At least 10 ex-government officials have been arrested in connection with the foiled plot, and several, including the ex-vice-president is still on the run (although he is believed to still be in the county).

The United Nations say tensions are still spreading across South Sudan’s remote states as the violence, which first erupted in the capital Juba late on Sunday, moved north to Bor, the site of an ethnic massacre in 1991.

“We (are) not in control of Bor town,” South Sudan’s army spokesman Philip Aguer told Reuters, without going into further details.

“The two main ethnic groups, the Dinka and the Nuer, could go into a full-fledged civil war in the country,” Gerard Araud, France’s ambassador to the United Nations and current president of the Security Council, told the BBC. He however called for dialogue.

Those sentiments were echoed by U.N. Secretary General Ban Ki-moon who said the violence could spread across the young nation.

South Sudan, which declared independence from Sudan in 2011, remains one of Africa’s least developed countries despite its coveted oil reserves, which supply almost all its government revenues and hard currency. Fighting has so far appeared to stay away from the oil fields.

A broader conflict could threaten aid and be exploited by neighboring Sudan, which has had persistent rows with Juba over their undefined borders, oil and security. That would further hurt efforts to build a functioning state in the south.

Machar, in an interview with the online Sudan Tribune, denied having any role in the fighting and said he was not behind any coup attempt. He accused Kiir of using clashes that erupted between members of the presidential guard to punish political rivals.

Machar said he was still in South Sudan, but did not give details of his location.

The fighting has revived memories of the factionalism in the 1990s within the Sudan People’s Liberation Movement (SPLM) – the group that fought Sudan’s army in the north for two decades.

The president sacked Machar in July and political tensions have been simmering since.

However Kiir told a news conference on Wednesday that he was ready for talks.

“He was asked whether he would accept any dialogue, and he said he is ready for dialogue,” presidential spokesman Ateny Wek Ateny told Reuters by telephone. He however revealed that Kiir said there were no discussions going on at the moment.

A group of East African foreign ministers will travel to South Sudan on Thursday to seek an end to the fighting. This is the  first foreign mission to enter the country since the eruption of the conflict.

Juba was quiet after sporadic overnight gunfire. But U.N. officials also reported fighting in Torit, to the east.

Helicopters are reported to have been sent to evacuate UN staff in Jonglei on Friday. Several UN officials have meanwhile called on all the parties involved in the conflict to exercise restraint.

The United Nations says the clashes have driven 20,000 people to its camps for refuge, and that “tensions seem to be on the rise in the other States, such as Unity and Upper Nile”.

France’s Araud said there were 7,000-8,000 U.N. peacekeepers in South Sudan, but added: “It is clear our soldiers will not intervene in the conflict.”

A Western diplomat said the expanded fighting was tipping the nation into an ethnic conflict that was “difficult to roll back”, adding Kiir had raised the stakes by calling it a coup.

“It will impact a lot of countries, and they are not beacons of stability,” he said of the region around South Sudan.

Uganda temporarily shut its border. But Kenya said its border was open, and aid agencies say a refugee camp nearby are braced for new arrivals. Kenya, like other neighbors, hosted Sudanese refugees during former Sudan’s long north-south war.

In Juba, traffic returned to the streets and the airport reopened, amid a tense calm in the capital of a nation the size of France, with 11 million people but barely any tarmac roads.

Britain said it was flying out some embassy staff and gathering names of other Britons who wanted to leave. Many aid workers live and work in Juba.

The U.S. State Department said it had evacuated three groups of its citizens on Wednesday, flying them out in two U.S. military C-130 aircraft and one private charter flight.

The Pentagon said it had also bolstered physical security at American diplomatic facilities in Juba.

The U.S. envoy to South Sudan, Susan Page, met Kiir on Wednesday and expressed U.S. concern over the violence and the arrests of opposition politicians.

“We call on the country’s political leaders to refrain from any action that could escalate an already tense situation or fuel the violence,” State Department spokeswoman Marie Harf said in a statement. “It is absolutely critical that political differences be resolved by peaceful and democratic means.”

Diplomats said the United Nations had reports of between 400 and 500 people killed and up to 800 wounded.

“Most people are scared they might be confronted with a mob or see dead bodies,” said one aid worker in Juba, after residents awoke to heavy gunfire and artillery blasts on Monday and Tuesday.