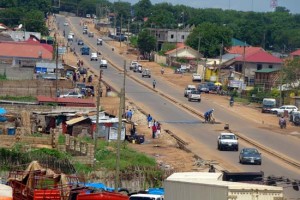 At least 10 ex-ministers are reported to have been arrested by the South Sudanese government over an alleged coup attempt on Sunday.

Fighting continued in Juba on Monday evening and at least 80 people are reported dead and over 100 in critical need of medical attention, according to reports.

The fighting also spread to Jonglei on Monday and at least 3 people were reportedly killed as the city was thrown into a state of chaos with shops being looted.

The government of South Sudan has revealed that several ex-state officials have been arrested over the armed insurgency in the the nation’s capital over the past two days. Among those arrested are Choi Tong Mayay, Oyai Deng Ajak, Majak D’Agoot, John Luk Jok and Madut Biar Yel.

The homes of Inspector General Pieng Deng Kuol and former vice president Riek Machar, who is suspected to be behind the attempted coup d’etat, were raided by the Presidential guard on Monday. Several items are reported to have been destroyed and people in the building abused. Government officials say the army were simply checking for the suspects.

Despite the isolated clashes yesterday, South Sudanese officials insist the government is in full control of the situation.

South Sudan’s Interior Minister Aleu Ayeny Aleu assured Sudan Tribune that the nation’s security agencies had everything under control. He called on citizens to remain calm as they return to their normal duties.

“Your government is in full control of the general situation. The disgruntled soldiers are being hunted and evicted from the pockets where they are suspected to be hiding,” he revealed.

Authorities are reportedly still searching for the former vice president, the inspector general and several other ex-ministers suspected of being involved in the plot to topple the regime.

According to local residents, soldiers continued to patrol the streets of Juba today, with road blocks at strategic junctions where cars passing are searched.

Isolated gun shots could reportedly still be heard in Juba today and the streets remained virtually empty as most people rarely ventured far. In the wake of this uncertainty many wonder what the future has in store for this young nation.