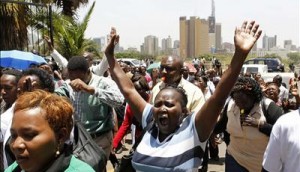 Kenyan officials have revealed that all health workers who are still on strike, despite the court order requesting them to resume work issued last week, will not be paid for the month of December.

Health workers across Kenya have been on strike since the beginning of this month in protest against a plan to devolve health function to county authorities.

Since the strike began there have been reports of patients’ conditions worsening in the absence of medical professionals to provide care. Patients, queuing for healthcare services, are reported to have been turned away from many state hospitals across the nation.

Private healthcare providers have largely benefited from this strike as many patients now turn to these facilities which have not been affected by the strike.

Last week, the High Court issued an order demanding all striking health workers to resume work, but the order has largely been ignored.

On Monday, at a meeting between several government officials aimed at finding a solution to the impasse, Isaac Ruto, chairman of the the governors’ council revealed that all health professionals “who will not have reported to work since the issuance of the court order will be treated as having absconded their employment by both the national and the county governments.”

The governor further stated that all health workers “who have absconded from work” will not be paid. He went on to dismiss several of the striking health officials’ requests, noting that they are superfluous—as some may even require a constitutional amendment.

In response to these reports, Sultani Matendechero, Secretary General of Kenya Medical Practitioners, Pharmacists and Dentists Union said the union will not be “intimidated” by the threats. Despite the warning of the possibility losing their salary for December, Sultani revealed that the health workers are poised to continue their strike. Meanwhile, officials have announced that the High Court has extended the order demanding all health professionals to return to work to next week Tuesday.

Sultani cautioned Kenyan authorities against hiring new staff, noting that their relative inexperience will result in a drop in the quality of the nation’s healthcare delivery.

Efforts to Settle the Impasse
Despite the hard talk by Kenyan authorities, the government has made several gestures in a bid to convince the striking health workers to resume work.

Chairman of the governors council, Isaac Ruto reiterated yesterday that health workers should have no worries about their remunerations being cut under the new scheme, as it is safeguarded by the County Governments Acts. He added that rather than getting worse, as health professionals fear the terms and conditions of their service is set to become, the governor noted that that their working conditions are set to improve.

The Health Cabinet Secretary James Macharia also revealed that the government is willing to co-operate to solve the deadlock. According to him, a draft resolution for a new health law has since been passed on to the health workers union for their comments and criticisms, but the union have failed to respond. Despite this, the union has been vocal in calling for a new health law.

County Reach Agreement with Striking Health Workers
According to reports, Machakos county authorities have been able to reach an agreement with striking health workers in the province to resume work.

The deal, which was signed by several official county representatives of Machakos health professionals and the Machakos county authority stipulates that the remuneration of health workers in the county will be increased, the number of health workers is also set to be increased and authorities are looking to directly absorb interns to fill vacant positions. The agreement also states that a Machakos health service committee will be created within 14 days to implement the agreement between the county authorities and health workers’ representatives.

Several commentators have expressed optimism that Kenyan authorities can resolve the impasse with the health workers following the steps of Machakos county officials. But with the health workers determined to continue the strike–even at the cost of their salaries–Kenyan authorities are bound to encounter some difficulties in convincing them to resume work.