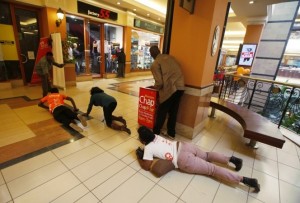 The New York Police Department (NYPD) have released a report on the September 21st attack on the Westgate mall in Nairobi’s Westlands neighborhood, which led to the death of 67 people, several injuries and the destruction of items worth millions of Kenyan Shillings.

Although the report confirms several information previously released by Kenyan authorities, it also discloses certain hitherto unknown facts and this has resulted in a barrage of questions directed at Kenya’s security agencies.

According to the report, four lightly-armed Al Shabab terrorists arrived at the Westgate mall in a silver Mitsubishi lancer on Saturday, 21st September at about 12:30pm (local East African time), setting off grenades before firing into the crowd of shoppers with AK-47 rifles.

The report claims the terrorists made no attempt to take hostages and that most of the casualties occurred in the first hour of the attack. It also adds that the terrorists “made some conscious effort to just target non-Muslims during the attack.”

Although it took about four days for Kenyan authorities to declare the mall safe, the report reveals that the last time the terrorists were caught on the mall’s CCTV camera was about twelve hours after the attack began.

This revelation has led to questions about the whereabouts of the terrorists. Kenyan authorities had earlier revealed that four charred bodies, suspected to be those of the terrorists, are in their custody and efforts are being made to identify them.

However, the report claims, “It is unknown if the terrorists were killed or escaped the mall. A major contributing factor to this uncertainty was the failure to maintain a secure perimeter around the mall.” There had been speculations that the terrorists escaped the mall by hiding among the victims as Kenyan security officials sieged the building.

But “Poor coordination and lack of effective communication between police and military commanders resulted in the military troops firing on members of the police tactical team, killing one officer and wounding the team commander.”

The report concludes that the terrorists sought to conduct a “high-profile” attack, inflict as many casualties as possible and escape. Adding that the attack has raised Al Shabab’s profile internationally. “It also clearly illustrates that armed assaults by terrorists on “soft” targets such as a shopping mall are a simple, effective and easy to copy tactic,” the report adds.

The NYPD is reported to have dispatched officials from the New York Joint Terrorism Task Force to Nairobi to assist Kenyan authorities with their investigations into the attack.

Meanwhile, a Kenyan security official has refuted the report’s claim that the terrorists may have escaped the mall.

The unidentified officer tells the Star newspaper that “No one can say that the attackers escaped after 12:15am just because there is no CCTV showing them in the building after that. One of them is seen turning the camera away from them but nowhere are they shown leaving the building.”

Another senior police officer is reported to note that “How can we believe in a report by people who were never directly involved in the investigations?”

Kenyan officials have since apprehended four suspects of Somali origin who are thought to be accomplices of the terrorists behind the mall attack. The four suspects, who appeared in court without lawyers last month, have pleaded not guilty. Their case is currently pending as the prosecution has requested more time to gather information.

Although the attack on the Westgate mall is seen to be a demonstration of Al Shabab’s strength in the region, an unidentified investigator explains that the attack may be a desperate move given the fact that African Union (AU) forces in Somalia, in conjunction with Somali security officers, have increased their attacks against Al Shabab. Only a few days before the Westgate attack, the joint Somalia-AU force captured one of the last urban areas still controlled by the terrorists in Middle Shabelle province.

Al Shabab is reported to have lost several of their strongholds to the joint Somalia-AU force in the past few years. Presently, the terrorists control swatches of communities in Southern and Northern Somalia.

Since the attack on the Westgate mall, several nations in the region have cautioned their citizens and security agencies to be on high alert for imminent Al Shabab attacks. “As the joint Somalia-AU force increase their assault on the terrorists”, the unidentified investigator explains, “they are likely to retaliate with attacks like the one on the Westgate mall.”

Al Shabab have revealed that the attack on the mall was conducted to coerce Kenyan authorities to withdraw from the AU’s peace keeping mission in Somalia.