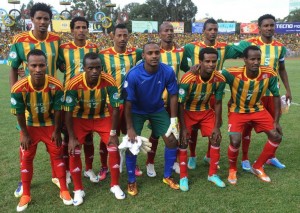 The Walya Antelopes of Ethiopia have been eliminated from the ongoing CECAFA Senior Challenge Cup after losing 2–0 to the Falcons of Jedaine on Sunday.

The Walyas came to the tournament as favorites after an impressive display during the Brazil 2014 World Cup qualifiers. Many spectators had even picked them to take the cup. Pundits say the Sudanese team’s win over the favorites makes them the “surprise” team of the tournament, with many fans eagerly looking forward to their encounter against the Copper Bullets of Zambia on Tuesday.

Although the Walyas threatened in the early stages of the match, their attacks met a solid Sudanese back line. The game seemed to swing in the balance until the 23rd minute when Ethiopian defender Salhadin Bargecho scored an own goal from a corner kick.

Three minutes later, the Walyas thought they had pulled even after a goal by Yusuf Yasin, only for the goal to be disallowed by the referee.

An excellent lob over Ethiopian goalie Dereje Alemu in the 69th minute by Ibharim Salah sealed the victory for the Falcons. Salah is currently the tournament’s leading goal scorer with a total of 4 goals.

Also yesterday, the Copper Bullets of Zambia successfully eliminated the Swallows of Burundi after a tightly contested encounter.

The two teams had to resort to a penalty shoot-out after failing to record any goals in 90 minutes—although they both came agonizingly close to scoring.

The Zambian team won the penalty shoot-out by 4 goals to 3, missing only two goals.

Following their victory over the weekend, the Falcons of Sudan are set to test their skill against the Copper Bullets of Zambia at the Mombasa Municipal Stadium on Tuesday December 9th.

Many pundits have predicted that this game will be very competitive and exciting. Although the odds favor the Zambians, the Sudanese team’s ability to record a victory over Ethiopia is proof that they are capable of causing an upset.

Also on Tuesday, Kenya’s Harambee Stars will take on the Taifa Stars of Tanzania at the Jomo Kenyatta Stadium for a place in the finals against the winner of the other game.

Earlier, current CECAFA champions, the Cranes of Uganda were eliminated in a penalty shoot-out by Tanzania. The CECAFA Cup, one of the oldest football competitions in the continent, brings together teams from across East and Central Africa.

Photo: The Walya Antelopes of Ethiopia.