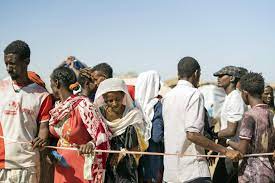 Hundreds of people from Ethiopia’s Tigray region are entering the neighboring Amhara region every day, fleeing the critical food shortage in their areas.

The small town of Raya Kobo in Amhara region is now home to thousands of ethnic Tigrayans who are seeking food and shelter.

Kobo’s town people have seen their resources overstretched with the arrival of ethnic Amhara people who had reached there from Raya Alamata, fleeing targeted attacks by Tigrayan forces.

The Tigrayan refugees unveiled that aid trucks entering into the Tigray region have been loaded with weapons to arm forces of the Tigray People’s Liberation Front (TPLF).

The refugees said large numbers of the residents in Mekelle, capital of Tigray region have satellite mobile phones which they received from the international aid organizations.

The displaced people further disclosed that at least two huge airplanes that have been taking off from Sudan have been landing every day in Mekelle and Shire, one of the towns in the region.

About 30 members of the insurgent group who reached the Amhara region have been apprehended by the Amhara security forces.

According to unconfirmed reports, the split appeared to occur between Oromia PP and Amhara PP over disagreement on undisclosed issues.