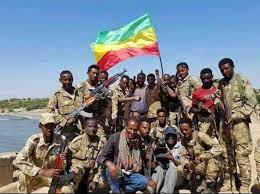 Fighting has begun between the Amhara government forces and Fano militias in Mota town, with reports that several fighters were wounded.

The fighting began as the government forces tried to disarm the Fano militia who had armed themselves to defend their people from looming attacks from Tigrayan forces, witnesses told Zegabi.com.

According to the witnesses, the government forces who have been using heavy weapons took the upper hand in the fresh fighting against the Fano militias.

Residents of the town have shown solidarity with the Fano militias and accused the town’s police of collaborating with the Tigray People’s Liberation Front (TPLF) which has been fighting the region since November 2020.

In their wide-ranging invasion against part of the Amhara region, TPLF forces have killed thousands of civilians and inflicted overwhelming property damage in the region until they were dislodged by government forces and Fano militias.

Meanwhile, the National Electoral Board of Ethiopia this week demanded the Federal government to release Dawud Ibsa from house arrest in the capital Addis Ababa.

Dawud, who is the leader of the radical ethnic Oromo Nationalist organization – Oromo Liberation Front – has been under house arrest for about one year.

The Board that Bertukan Midekssa is leading wrote a letter to the Federal Police Commission and National Information and Security Services (NISS) saying that it has confirmed Dawud’s house arrest.