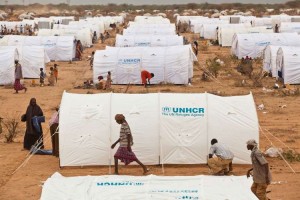 Somalia is imploring its citizens in refugee camps in Kenya to confidently return home as the country is relatively safe.

“There are places that are already safe and ultimately we will secure the whole country. We will never put the Somali people in harm’s way by sending them to places where it is not safe,” the Somali Ambassador to Kenya Mohamed Ali Nur noted in a press conference.

Earlier in the month the United Nations Hugh Commission for Refugees (UNHCR) signed an agreement with the governments of Kenya and Somalia to facilitate the safe return of an estimated 500,000 refugees from camps in Kenya.

Thousands of Somalians have fled the warring country since the central government collapsed in 1991. A large percentage of them resettled in refugee camps in neighboring countries such as Kenya. Kenya is home to what is reportedly the world’s largest refugee camp, Dabaab, which houses almost 400,000 refugees—mostly Somalis. Kukuma, another refugee camp, which houses about 90,000 refugees is also expected to be emptied by this exercise to repatriate Somali refugees.

The Somali Ambassador to Kenya stressed that with the assistance of AMISOM, the government has been able to win back some portions of the country from the Islamist militant group, Al Shabab.

Abel Mbilinyi, Kenya’s deputy UNHCR director noted that the returnees will be primarily resettled in three priority areas, which have been disclosed as Luuq, Baidoa and parts of Kismayo.

Thousands of Somali refugees are reported to have returned to their home country in the past few months. Despite claims from Kenyan authorities that the refugee camps will be shut after this 3-year long mass repatriation exercise, the UN insists there are no plans to shut the camps. Adding that refugees must voluntary decide to stay or return.

Pundits say despite the threat of revenge attacks following the Westgate mall massacre by Al Shabab militants–who Kenyan authorities have discovered are Somali nationals–some Somali refugees, concerned about the state of security in Somalia as well as the lack of medical and educational facilities, are likely to remain in Kenya.