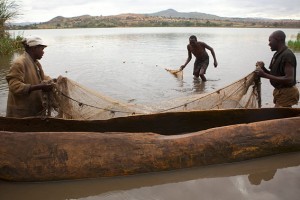 The Tanzanian government has announced plans to shut down fishing and other human activities on three lakes: Lake Babati, Lake Burunge and Lake Basoutu (or Lake Balangida)

Manyara Regional Commissioner Eraston Mbwilo says the three water bodies will remain ‘closed’ for six months beginning 1st of December this year to the 1st of June 2014. The move will allow for regeneration of fish in the three northern zone fresh-water lakes and mitigate the effects of overfishing brought about by the use of unfriendly fishing gear.

“We are closing down the lake in order to preserve the environment in addition to let the fish and other marine species in the water bodies to breed and replenish,” said Mbwilo.

“This is one of our approaches to ensure that the available natural species continue to exist in the lake and even the fish stock increases a bit,” he explained.

Manyara region produces over 10,000 tons of fish annually, most of which is sold locally in Arusha city. Regional authorities however claim that foreigners from as far as Democratic Republic of Congo and Kenya have invaded the country’s fishing industry even paying local fishermen to fish for them.

Lake Babati is overgrown with weeds and threatened by a receding shoreline. This poses a threat to the crocodiles and hippopotamuses which make the water body a leading tourist attraction. Local communities also rely heavily on the lake for their domestic water needs.

Photo of fishermen on Lake Babati.