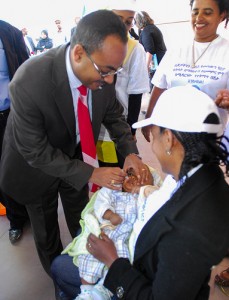 The Health Ministers of Ethiopia and Namibia on Wednesday signed an agreement between both nations that will enable Namibia benefit from Ethiopia’s resurgent health sector.

The deal, which was signed in the Namibian capital Windhoek, will see Ethiopia send health experts to the south African country. The Ethiopian government is also expected to provide health training programs to Namibian experts and continue its scholarship of Namibian healthcare students in Ethiopia.

Despite having over 300 major hospitals and many other minor health facilities, Namibian officials say the country is facing difficulties in containing the spread of numerous diseases, especially in rural areas.

According to the Namibian Minister of Health and Social Services, Dr Richard Kanwi, the country is currently facing a shortage of health professionals, while simultaneously seeing the increase of numerous communicable and new non-communicable diseases.

Speaking at the signing, the Ethiopian Health Minister Dr Kesetebirhan Adamasu revealed Ethiopia’s impressive healthcare successes, noting that his country has achieved its health-related millennium development goals about 3 years ahead of time.

Ethiopia, one of Namibia’s main ally since the colonial era, has systematically transformed its healthcare sector in the past few years. Almost 40,000 new health professionals have been trained thus far, and about 18,000 heath facilities are due to be built as part of the government’s new outlook which prioritizes on delivering quality, accessible healthcare to all its citizens.