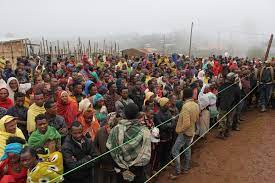 The civilians who were displaced from east Wollega zone just because of identity have called the federal government to deploy the National Defense Forces and rescue their lives from imminent attacks of OLF troops.

The over 30,000 farming communities, currently living in open air in Gubuseye town in the same zone and region, said they are surrounded by rebel OLF troops.

The residents are worrying for their lives as the OLF troops have encircled and are readying to kill them.

Neither Ethiopia’s army nor the regional security forces are deployed despite the calls made by the civilians.

The OLF also called “Shene ” troops have taken hostages of the civilians, denying them permission to leave to other parts of the country.

He said the meeting was supposed to be held with Adanech Abebie, mayor of the Addis Ababa city administration.

The meeting was already scheduled to take place on Friday. But the mayor did not make it due to a City council meeting which continued for a second day. And the meeting with the Holy Synod had to be cancelled.