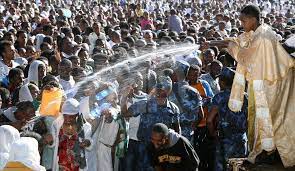 Orthodox Christians across Ethiopia Wednesday celebrated Epiphany, the baptism of Jesus Christ, with ever unique and colorful religious and cultural activities.

A notable absentee at this year’s celebration is the Patriarch of Ethiopian Orthodox Church (EOC) Abune Mathias who fell ill.

The commemoration starts on the eve of the main festival on 18 January.  The eve is known as Ketera, which means blocking the flow of water for the blessing of the celebrants.

On Ketera, people escort their nearby church Tabots (replicas of the Ark of the Covenant) to Timkete-Bahir (a pool, river or artificial reservoir), as carried by at least two priests of the church and accompanied by a great ceremony and large crowd.

Temporary tents are set up at the public space where each replicas of the Ark of the Covenant rest and members of the church choirs chant hymn all night long and are accompanied by priests with their prayer.

The Tabots while heading to the temporary tents are also accompanied by the beating of drums, ringing of bells, and other spiritual activities as integral parts of the Timket celebrations.

The word Timket was derived from the ancient Semitic language of Ge’ez and remains to be one of the most joyous celebrations in the Orthodox Church calendar.

The faithful spend the night attending night-long prayers and hymn services, including the Eucharistic Liturgy.

The actual celebration of Timket starts in the morning with pre-sunrise rituals.

These are followed by the sprinkling of the blessed water on the congregation, as well as other ceremonies.

At around 10 a.m., each tabot begins its procession back to its respective church, involving an even more colourful ceremony with various traditional and religious songs.

The Orthodox clergies play a pivotal role and they sing religious songs in praise of Jesus Christ. Church servants praise the almighty, Saint Mary and Angels to the delight of the faithful who practice the same.

Three year ago, the United Nations Educational, Scientific and Cultural Organization (UNESCO) had inscribed Timket on List of the Intangible Cultural Heritage of Humanity, due to its unique celebrations across Ethiopia – Africa’s second populous nation with an estimated over 110 million total population.