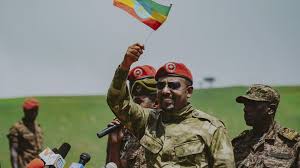 Witnesses told Zegabi.com that heavy sacrifices had been paid by the Ethiopian forces as they fought to take control of the town.

The highest scarifies were paid by the Amhara Fano fighters who penetrated the strong fortification built by the Tigrayan forces for months, according to the witnesses.

It is not clear how many soldiers were killed from both sides but Tigrayan forces retreated after the Ethiopian joint forces destroyed the long fortification.

Witnesses said the joint federal forces currently are advancing to Ambaguna and Shire towns of the Tigray.

Unconfirmed information indicates that the Ethiopian joint forces also took control of “Mai and Shuga” areas in the Tigray region.

“We will mobilize our huge army and defeat Abiy’s forces” President of the Tigray Regional State Dr. Deberetsion Gebremichael was quoted as saying after losing the battle in Adi Arkay.

Another fighting took place between the forces as Tigrayan troops attempted to penetrate into Wolkait from the neighboring Sudan.

It is learned that those who get wounded during the fighting were receiving treatment in a hospital that was located in Sudan in nearby areas.