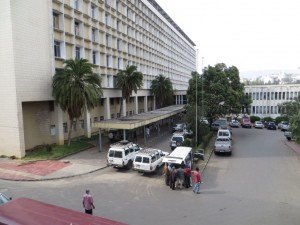 Due to the power outage, patients in severe conditions who needed surgery were left stranded as general surgery rooms as well as emergency surgery rooms were out of service. Hospital staff were seen administering oxygen manually to patients.

According to doctors and nurses, patients who were scheduled for surgery had to be rescheduled for a different day. This is expected to cause an overload on the hospital’s schedule over the next few weeks.

The hospital usually receives power from two sources. If for some reason these sources fail, the system is designed for a backup generator to take over. According to media reports, the power failure resulted from a problem with the power transmission mechanism. Power outages are regular in Addis Ababa, however on this occasion, the backup generator failed to come on as usual.

This incident highlights the need for a lasting solution to the power problem in this city.

In order to make sure this does not become an issue in the future, the hospital has placed a request with the Ethiopian Electric Power Corporation to supply a third power source to the hospital. In addition to this, the hospital plans to purchase a new generator and install small generators in vital areas around the facility. Hospital officials believe these precautions will ensure the hospital’s patients do not suffer from lack of treatment due to power outages in the future.