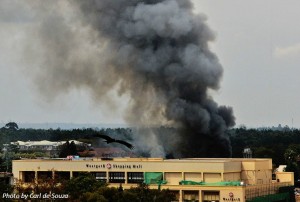 A Somali-Norwegian man has been identified as a suspect in the Westgate Mall attack which left 67 people dead.

23 year old Hassan Abdi Dhuluhow is reported to have spent the early years of his life in Somalia before moving with his family to Norway in 1999.

The suspect was identified on CNN’s Newsnight from a CCTV footage of the attack which showed various parts of the Westgate Mall on the first day of the siege.

Norwegian authorities report that several of the suspect’s former classmates have also positively identified him on the footage.

The Norwegian Police Service say the suspect has been on their radar since he established contact with Profetens Ummah, a Norway-based Islamic group, in his high school days.

Presently, the whereabouts of the suspect is unknown. It is unclear if he escaped the building or was killed by Kenyan security forces during the raid to free hostages in the mall.

Investigators say charred bodies on the scene have been delivered to a morgue where they are expected to be identified in the next few weeks.

Although Norwegian authorities claim the suspect may have placed a call to his family from inside the mall, his relatives say the last time he made contact with them was in summer.

Since Kenyan authorities began investigating the attack, there have been numerous speculations about the identifies the attackers. Earlier there were reports that about 15 suspects carried out the attack, this number was subsequently reduced to 6 and later 4. The names of 4 suspects the authorities had released also turned out to be nom de guerres.

The Norwegian Police Service says investigators were sent to join Kenyan officials in uncovering the identities of the attackers after reports revealed that a Norwegian citizen was involved in the attack. Investigators are apparently trying to trace any connections between Hassan and other terrorist groups or individuals in Norway and Somalia – where he is said to have frequented in the past few years.

The identification of Hassan gives some weight to numerous speculations by witnesses that the attackers at the mall included foreign nationals.

Increasingly, Islamic extremist groups, including Al Shabab, have made several attempts to expand their recruitment fields to include communities populated by African immigrants in Europe and the United States.