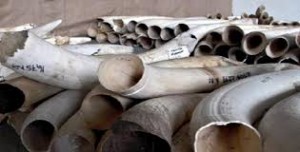 Kenyan customs officials in the port city of Mombasa have seized 1,600 pieces of illegal ivory on their way to Turkey.

The illegal ivory stash weighing almost five tonnes and estimated to worth 97 million shillings ($1.14 million) were found in two separate shipments on Tuesday and Friday. The ships were destined for Turkey.

Arthur Tuda, a Kenyan Wildlife Service official in charge of the coastal region disclosed that “(The ivory) came through the Kenyan-Ugandan border stashed in sacks.” He said “ export documents declared the containers as carrying sesame seeds.”

The bust reflects the threat poaching presents to wildlife conservation efforts across Africa. An estimated 472,000 elephants live on the continent and their survival is under threat. Poaching and urbanization projects on natural habitats as a result of growing populations are the main issues that pose the greatest threat to the survival of Africa’s wildlife.

Although ivory trade is prohibited under the Convention on International Trade in Endangered Species of Wild Fauna and Flora (CITES). Poaching has increased dramatically in sub-Saharan Africa due to increasing demands from the Middle East and Asia. Experts estimate that illicit trade in ivory generates close to $10 billion annually.

Authorities are considering the possibility that revenues generated from the illegal trade in ivory and rhino horns may be used to fund terrorist activities.

Arthur Tuda reassured the press that the government would remain vigilant in the fight against poaching and will do all within its power to stop smugglers from using the port as a transit for illegal ivory.

“We want to ensure that our port is not used as a transit point of ivory,” he said.

“We have to step up the war on poachers to completely wipe out the ivory trade, its threatening elephant populations in the country and entire region.”

Complete herds of elephants and rhinos are known to have been killed illegally for their parts. Elephant tusks and rhino horns are in demand in Asia where they are reportedly used in powerful traditional medicines and as ornaments in the fashion industry.