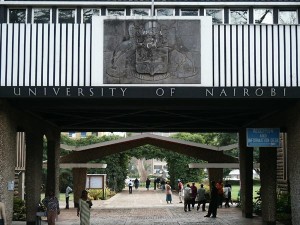 The University of Nairobi today signed a Collective Bargaining Agreement with the Kenya Universities Staff Union.

The deal which only fractionally increases the allowance of University staff covers accommodation, transportation and medical allowances. It also includes allowance for the relatives of deceased University workers who die in office.

The University was represented by Professor Peter M. F. Mbithi, the Deputy Vice-Chancellor, Administration and Finance, while the KUSU was represented by its Secretary General, Dr. Charles Mukhwaya. The Collective Bargaining Agreement specifically covers the terms and conditions of service of the University staff between 2010/12 and 2012/13.

Prof. Mbithi expressed his gratitude to the KUSU for agreeing to the terms of the CBA and hoped the move would motivate the University’s staff to put in their utmost effort.

On the other side of the table, Dr Mukhwaya also expressed his gratitude to the University for budgeting resources for staff welfare. He however implored the university to speed up future CBA agreements, so lengthy negotiations could be avoided.

This CBA, which affects all non-teaching staff in grades V to XIV, will see staff’s monthly transport allowance increase by about KES 3,000 for car owners and KES 2,500 for commuters. Dental and optical allowances were also raised by KES 6,000. Transport allowance and the compensation for relatives of staff who die in office also increased by 30%.

Besides the transport allowance which is backdated to April 2, 2012, the other allowances will be implemented from Tuesday.

The KUSU has consistently prodded the Kenyan government to pay University staff more and create audit teams to monitor how allocated funds are distributed. Earlier this year, the KUSU threatened to direct its members to go on a strike if the government failed to meet its demands regarding a disputed payment agreement.