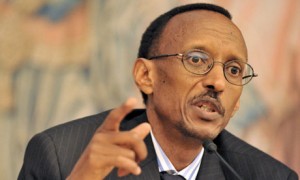 The Rwandan people are once again sharply divided, this time it is over President Paul Kagame’s visit to Canada to celebrate Rwanda day with an estimated 3,000 Rwandans on Saturday.

While many participants cheered the event from inside the auditorium, a group of protesters not so far away were calling for the arrest of President Kagame. The protesters accused the Ugandan government of human rights violations in the 1998 genocide and questioned its alliance with the M23 rebel group.

At the United Nations General Assembly in New York, President Kagame answered accusations of his government being an accomplice to the crisis in Congo by telling reporters that he doesn’t think the problems of the Congo should be transferred to Rwanda. In his words “I cannot be the one to keep being asked to answer what should work for Congo. This is a serious problem,” he told reporters.

The Rwanda day celebration was created to connect Rwandans outside Rwanda with one another in order to celebrate Rwandan culture and work together to invest in and develop the eastern African nation. This is the first edition of the celebration to be held in Canada, it has previously been held in several locations including the United States, London and Paris.

This year’s celebration, which is themed Agrico: Investing in our future, marks the 5th edition of the Rwanda day celebration.

At the event, there were exhibitions by a few Rwandan businesses before a large party which featured Rwanda-Canadian artists. Speaking at the event, President Kagame urged his people to work towards the next chapter of the country’s economic transformation, which is making Rwanda a middle income country by 2020.

President Kagame of Uganda once fought as a rebel against the government of Idi Amin. In 2000 he took power after the resignation of his predecessor, Pasteur Bizimungu. In 2010, Kagame won the elections in Rwanda by close to 94%. There were widespread accusations that the government used force against members of the opposition in the period running up to the election.