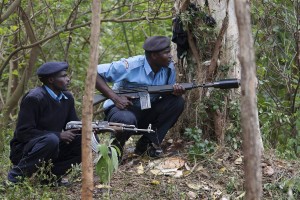 Kenyan police investigating the attack on Westgate mall are examining claims that an ex-Police officer was part of the attackers.

According to Kenyan Police sources, a serving officer reported that an ex-colleague had confessed to being part of the mall attackers during a phone call. Reports also reveal that investigators have found a gun in the crime scene with the Kenyan Police’s serial numbers.

If this is indeed true, it confirms speculations that the attackers had help from security officials.

Al-Shabab, the Somali based militant group has claimed responsibility for the attack, but analysts say it was carried out in a way that is not usual to Al Shabab. The attack, which left 67 people dead, is the largest terror attack in Kenya’s history following the U.S. embassy bombing in 2001.

Meanwhile, the Kenyan Red Cross confirmed today that the official number of missing people has been reduced from 60 to 39. Since our last update on the number of missing persons, about 14 people have been found alive in hospitals, while 7 have bee found dead. Red Cross Officials say they do not expect to find more bodies under the rubble.