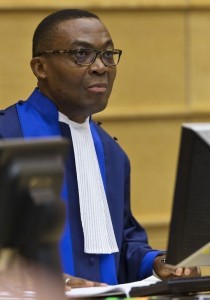 A senior judge at the International Criminal Court has warned media, bloggers and social media users against revealing the identity of witnesses testifying in the case against Kenya’s deputy president.

This warning comes after a Kenyan newspaper allegedly published a photograph of the first witness who testified on Tuesday. The court had avoided naming the witness referring to her as PO536 and allowing her to give evidence from behind a closed curtain. They had also blurred her face and distorted her voice in the court video.

There have been widespread claims of witness intimidation since the indictment of the accused by the ICC, which has led to some witnesses withdrawing from the case.

Beryl Aidi, an official from the Kenya Human Rights Commission warned that the supposed revelation of the first witness’ name could deter further witnesses from testifying.

Now that a witness has been identified it will be difficult to assure others that they and their family members will be safe. And in Kenya, it’s not just the nuclear family: There are aunts, uncles, cousins,” she told AFP.

“Witnesses are bound to feel that their family and their extended family may be in danger and might want to withdraw,” she explained.

Kenyans are closely following the trial against Deputy President William Ruto who is accused if organizing the post-election violence of December 2007.