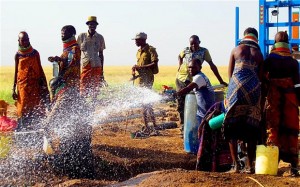 The aquifers which are located hundreds of feet underground were discovered through the collaboration of a French American Firm, Radar Technologies International, the Kenyan government and UNESCO by using satellite imagery and seismic data. One aquifer which holds around 10 billion cubic metres of fresh water is located near Lodwar while the other, which holds over 200 billion cubic metres is in the Lotikipi basin located West of Lake Turkana. The two add up to about 10 times of the country’s current water reserves.

Soon after the discovery of the first aquifer, minister of environment, water and natural resources Professor Judy Wakhungu described the find as extremely significant saying that it wasn’t too deep and shouldn’t be “too expensive to develop.”

The Turkana region border Ethiopia and South Sudan and has about 700,000 residents. Water in the area is scarce and most people have to live on about 10 litres a day which is about half the minimum daily requirement. The new discoveries could therefore potentially change the lives of people in the area.

The aquifers are being replenished at a rate of 1.2 billion cubic metres every year, an amount which is enough to supply the whole country.

Even with the discovery, Brian McSorley, a water expert with Oxfam believes that the real test lies in establishing the right infrastructure to distribute water to the scattered people of Turkana. Most of the residents of the area are pastoralists who live off their camels, goats or sheep. The area also experiences sporadic cattle raids from neighbouring communities such as the Samburu and Pokot and neighbouring countries such as Uganda, Sudan and Ethiopia.

UNESCO’s East Africa director, Mohamed Djelid, has also emphasized that “these resources must be managed well in order that they benefit the people of Kenya.”

In recent years, oil reserves were discovered in the Lokichar basin, south of Lodwar by UK-based Tullow Oil Company. With both water and oil this area could draw immense international attention.