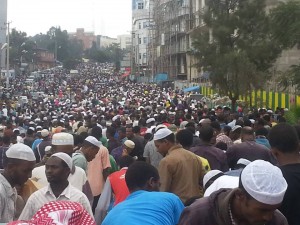 Thousands of Ethiopian Muslims on Friday staged protest rallies in Addis Ababa’s two Mosques in the newest show of discontent over what they allege is the government’s meddling towards religious affairs.

After attending Friday prayers, large numbers of Muslim protesters turned out at Grand Anwar mosque, condemning the arrest of fellow Muslims and asking the government to stop interfering in religious affairs.

“We are gathered here to call for the release of Muslim leaders and followers arrested in the pretext of terrorism”, a protester told Sudan Tribune on condition of anonymity.

Police later arrived at the scene to find protesters throwing stones and causing damage to public and government properties.A police source told the Sudan Tribune that some protesters were arrested, but declined to give an exact figure.

“We will continue to fight against marginalisation of Muslims in Ethiopia and the protest will continue until our religious rights are reclaimed”, organisers said.

The Ethiopian government has repeatedly denied of intervening in religious affairs and associates the Muslim protests with Islamic extremism.Some government authorities claim the “Muslim movement” has a hidden political agenda and is more than it appears to be.However, critics say Ethiopia’s crackdown on Muslims in recent years has fuelled tensions between the Muslims and government.

Attempts by Sudan Tribune to contact Ethiopia’s communications minister, Shimels Kemal, for comment were unsuccessful.
The Horn of Africa nation, which is fighting Islamic extremists in Somalia, attaches great concern to a possible birth of extremism on its soil and sees the issue as one of national significance.

Opposition groups have warned that foreign extremists could be inspired to enter the country and join the insurgency if the government’s hard-line stance on Muslims continues.

Ethiopia is a secular state and Christians are the majority in the country’s 84 million population; Muslims make up about 36 % of the population. Ethiopia was the first country to give refuge to followers of the Prophet Mohamed, who had fled their home to escape persecution.