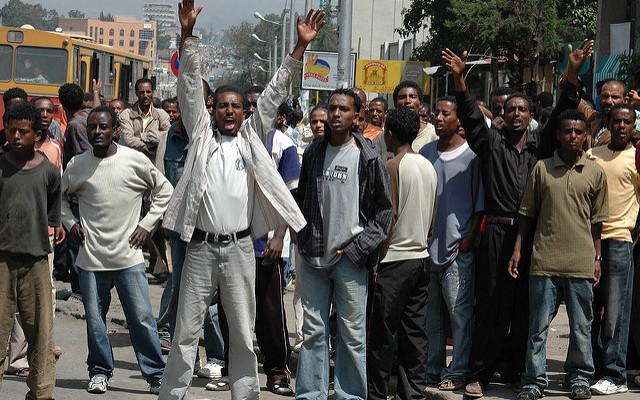 Egypt has dismissed allegations that it funds and trains members of Ethiopian opposition groups responsible for the ongoing violent anti-government protests in the East African country.

On Tuesday, Egypt’s Foreign Ministry denied the claims made by Ethiopian authorities on Monday. Ethiopia’s Minister of Information Getachew Reda said there are elements in Egypt working with forces looking to destabilize Ethiopia.

Reda, who also accused Eritrea of training and funding violent opposition groups, said the Egyptian government might not be directly linked with these groups, BBC Newsreported.

Abu Zeid also said that high-ranking Egyptian officials had contacted Ethiopian officials regarding the claims, Xinhua Egypt reported. He added that officials from both countries should be cautious of groups seeking to plant seeds of distrust between Egypt and Ethiopia.

Ethiopia has been involved in negotiations with Egypt since 2013 over the Grand Renaissance Dam (GERD).

Ethiopia’s President Mulatu Teshome said on Tuesday that countries envious of the GERD’s construction are working with Ethiopian opposition groups in the diaspora to make Ethiopia a failed state.

“Countries displeased with our determination to build a great renaissance dam on our own resource have for a long time conspired with Diaspora extremist to destabilize our country,” Teshome said during a speech in Ethiopia’s parliament. “Unfortunately, by galvanizing misguided youth, they have succeeded in burning and destroying factories vital to our emerging economy.”

“By any reckoning, the destruction of industry and intimidation of foreign investors has nothing to do with the legitimate grievance of youth,” he added.

This week Ethiopian authorities declared a six-month-long state of emergency due to widespread anti-government protests in the Amhara and Oromia region.

The protests, which started in November last year, have since turned deadly after clashes between security forces and demonstrators. Human Rights Watch puts the number of causalities at around 500.

The state of emergency was reportedly declared after the government analyzed the loss of life and damages to properties. Last week, protests attacked and destroyed properties belonging to several foreign companies in the Oromia region, Reuters reported.