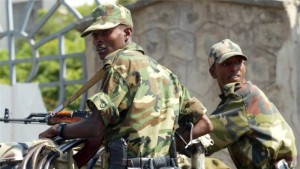 A group of gunmen, suspected to be from Eritrea, have attacked and killed over 20 Ethiopian soldiers in the southern region of Arba Minch.

The surprise attack, which occurred on Wednesday, led to the death of the regional army commander. A number of soldiers also sustained injuries in the attack. The injured have since been transported to the hospital where they are receiving treatment.

Government forces and the assailants engaged in a shootout which lasted for hours. Several gunmen were killed in the shootout while others have been arrested.

The gunmen are allegedly from Eritrea. The men are believed to have sneaked into Ethiopia via Moyale, a border town with Kenya.

Officials have since launched an investigation into the deadly attack. Several people in Arba Minch have been reportedly arrested in connection with attack and gunmen.

Addis Ababa has accused Eritrea of masterminding a number of cross-border attacks. However, Asmara has routinely denied the accusations.

In February, a group of gunmen from Eritrea allegedly kidnapped over 400 Ethiopian gold miners from the Tigray region. No group has claimed responsibility for the mass kidnappings.

A similar incident occurred in 2012 when gunmen, believed to be Eritrean soldiers, kidnapped 100 miners in the Tigray border region.

Ethiopia has also been accused of carrying out attacks within Eritrea’s borders. According to Addis Ababa, the attacks were conducted in retaliation for Asmara’s continued raids and cross-border kidnappings.

The two East African countries fought a two-year long war over a border dispute in 1998. The conflict between the neighbors led to the death of over 70,000 people. Despite the cessation of hostilities, the border dispute is yet to be resolved.