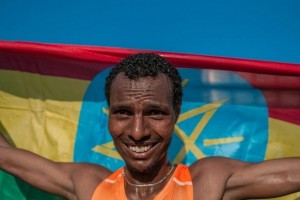 Ethiopian athletes won the 120th edition of the annual Boston Marathon on Monday after dominating both the men’s and women’s division.

Ethiopia has a coveted reputation for being a long distance running powerhouse. However, until now, the country has never recorded a clean sweep of all titles at the Boston Marathon.

In the women’s division, 29-year-old Atsede Baysa won the race with a time of 2:29:19. Speaking through a translator, Baysa said she was very happy and lucky to win the Boston Marathon.

“To win Boston is not easy,” she said.

Meanwhile, Kenya’s Joyce Chepkirui came third with a time of 2:30:50.

Ethiopia is reportedly yet to selected their team for the upcoming Olympic Games in Rio, Brazil.

Ethiopia has been recently embroiled in a doping scandal involving some of the country’s elite athletes.

The World Anti-Doping Agency (WADA) and the International Association of Athletics Federations (IAAF) have given the country an ultimatum to conduct mass doping tests on about 200 athletes by November or get banned.