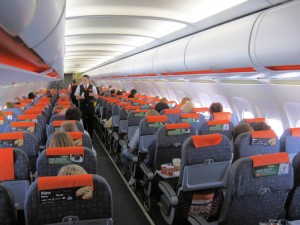 A 34-year-old man of Eritrean descent is considering legal action after being sent off an EasyJet flight by armed guards because a fellow passenger did not feel safe with his presence aboard.

According to Meghary Yemane-Tesfagiorgis of North London, the incident, which he describes as “racial profiling,” happened on March 29th.

Yemane-Tesfagiorgis was heading back to London Gatwick from Rome’s Fiumicino airport. While waiting for the plane to take off, the captain suddenly asked him to exit the flight.

“I was asked to leave the plane by the captain, when I asked why? He explained: ‘A fellow passenger has stated that she does not feel safe with you on board,” Yemane-Tesfagiorgis revealed.

Reports indicate that armed Italian officers walked Yemane-Tesfagiorgis off the plane to the airport’s police station following the captain’s message.

“I was subjected to further questioning and intimidation by the Italian authorities before being left in the airport for a further 15 or so hours,” he said.

EasyJet confirmed the incident in a press release. “Mr. Yemane-Tesfagiorgis was questioned by the authorities as a result of another passenger reporting concerns about his behavior, ” the company said. “The safety and security of its passengers and crew is our highest priority and airlines have to take any security-related concerns seriously.”

Yemane-Tesfagiorgis, who said he felt violated by the incident, is now seeking legal advice.

“It was racial profiling. If she feels uncomfortable, she should get off the plane… It’s not about me and EasyJet. It is way bigger than that,” he said.