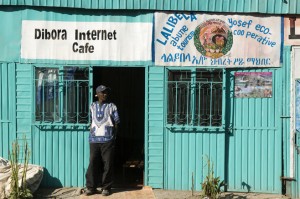 Ethiopia has denied claims that the government deliberately cut Internet access to the Oromia region which has been affected by months of bloody protests.

Bloomberg reported that for over a month, people in Oromia and the surrounding regions have not been able to access Internet messaging applications such as Twitter, Facebook Messenger, and WhatsApp.

“All are not working here for more than one month,” Ambo University lecturer Seyoum Teshome said. “The blackout is targeted at mobile data connections.”

Reports also indicate that people in Hawassa, a city located in the southern region of Ethiopia, have also not been able to access the above-mentioned applications for more than a month.

Ethiopians rely on state-owned Ethio Telecom for access to the Internet.

There have been reports that the government of Ethiopia has acquired technology to control Internet messaging applications.

“Pulling the plug in social media is a predictable attempt to cut the flow of news and information about the Oromo protests,” said Leslie Lefkow, deputy director for Africa at Human Rights Watch.

However, the Ethiopian government has denied claims of an intentional plan to restrict people in Oromia regions from accessing the Internet.

Government spokesman Getachew Reda said on Monday that the cause of the Internet failure in these areas is currently being investigated. “We have not yet found any explanation,” Reda said.

The protests in Oromia, the largest region in Ethiopia, began last November over a controversial government expansion plan. Hundreds have lost their lives in the waves of protests, which the government says has been high-jacked by forces looking to destabilize Ethiopia.