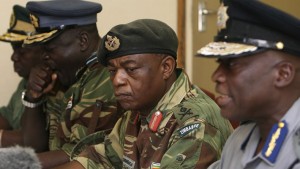 A bus trafficking 21 Ethiopians illegally to South Africa crashed on a highway in Zimbabwe’s second largest city Bulawayo on Tuesday. Three people were killed and 19 others sustained serious injuries after the crash, which was triggered by a burst tie.

Zimbabwean Police say the incident occurred around 1 a.m. and of the three dead two were Ethiopian nationals. The Zimbabwean driver of the bus died after being admitted to the United Bulawayo Hospitals. The Ethiopia victims reportedly died on the spot from severe head injuries.

Zimbabwe National police spokesman Chief Superintendent Paul Nyathi said only the conductor of the bus was unhurt in the fatal crash.

“The Zimbabwe Republic Police would like to confirm the death of two foreigners and a local driver who died in an accident,” Nyathi said. “The Toyota Hiace they were travelling in burst its front tyre, veered off the road and overturned before landing on its let side.”

“As police we are conducting investigations on the presence of foreigners in the country.” He also called on Zimbabweans to be law abiding and observe traffic laws.

The other passengers, who sustained serious injuries including broken limbs, have been transported to the hospital.

Bulawayo Chief Fire Officer Mr. Richard Peterson confirmed that all the passengers of the bus were Ethiopian nationals.

“All the passengers were of Ethiopian origin. They were rushed to Bulawayo’s United Bulawayo Hospitals (UBH) and Mpilo Central Hospital,” he said.

16 passengers were reportedly transported to UBH for treatment. Three others received treatment at Mpilo Central Hospital.

Peterson, who said two ambulances responded to the accident, described the gory scene laden with dead bodies and broken limbs.

“The bodies were lying on the ground while injured passengers sat by the road side some with broken limbs.”

The conductor of the bus, who survived the fatal crash without any injury, has since been handed over to the police.

Despite the dangers of illegal immigration, Ethiopians continue to leave their homes in search of better lives. Thousands of Ethiopians have left the country despite the fact that its economic growth has been lauded internationally. Ethiopian immigrants usually head for Europe, the Middle East and other African countries.

According to the United Nations refugee agency, there are more than 20,000 Ethiopian refugees in Kenya. Somalia and Egypt are hosts to more than 3,000 each. There were about 7,000 Ethiopia refugee registered in Yemen around April this year.

South Africa also hosts a large community of Ethiopians who have been targeted in the recent spate of violent xenophobic attacks. In November, 6 Ethiopian men were killed after angry locals attacked and lynched them.

The incident happened in Durban, South Africa which has a history of violent attacks on foreigners. Locals, particularly poor South Africans, blame foreign nationals for the lack of jobs and increasing crime rates – hence the attacks.