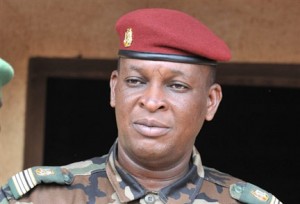 An African Union (AU) general, who also served as the transitional president of Guinea, on Tuesday pleaded guilty to charges of smuggling over $50,000 in cash into the United States.

Sekouba Konate was indicted in May on charges of smuggling bulk cash and making false statements. The trial of the 51-year-old in a U.S. District Court in Virginia began on Tuesday.

Konate reached a guilty plea deal with prosecutors that will see his sentence reduced to about five years. The AU general, who served as president of Guinea for a year after a coup in 2010, is scheduled to be sentenced in February.

Prosecutors say Konate, who also known in Guinea as “El Tigre” due to his intensity in battle, illegally carried $64,770 into the U.S. in June 2013. He flew into Washington Dulles International Airport from Ethiopia and he went through customs without declaring the cash.

Konate reportedly claimed to be carrying about $10,000 or less – the other stash was hidden in his luggage and undeclared.

VOA reports that Konate’s family resides in North Carolina, where he owns a property. U.S. Immigration and Customs Enforcement officials became suspicious of Konate due to his property purchases. They also received information accusing Konate of corruption during his brief tenure as Guinea’s president.

During a pretrial hearing, Konate said he did not fully comprehend the laws of American customs due to language barrier. Guinea is a Portuguese speaking country.

He reportedly also described the fact that he was searched as ‘improper’ due to his status as former Guinean president and commanding general of the African Union forces.

However, a Reuters report indicates that in his plea deal, Konate agreed that the seizing of his $61,770 was lawful. The deal also stipulates that $3,000 would be returned to Konate as “humanitarian aid.”

Neither Konate nor his lawyer has released any public statements regarding the recently signed guilty plea deal.