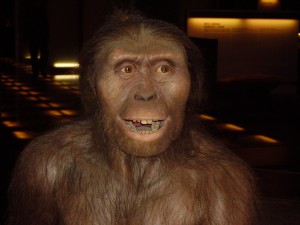 Tuesday marks the 41st anniversary of the discovery of a humanoid fossil named ‘Lucy’ or ‘the real eve’ in Ethiopia. Google commemorated the discovery, which helped scientists understand human evolution, with a doodle.

The humanoid remain was christened’ Lucy’ after a Beatle’s song. It is estimated to be around 3.2 million years old. The bones of the Australopithecus afarensis specie was uncovered in 1974 by archaeologists Donald Johanson and Tom Gray in the Awash Valley of the Afar region in Ethiopia.

Scientists have discovered other remains of Australopithecus afarensis; a species in existence about 3 to 4 million years ago which shared some characteristics with apes and humans. However, Lucy remains the most complete with about 40 percent of the fossil still intact. The rare discovery assisted scientists in understanding how apes evolved into bipedal humans.

The Google doodle in honor of Lucy features an animated version of the ‘March of Progress’ – a popular illustration of human evolution. The doodle features an Australopithecus afarensis specie walking in between a human and a chimpanzee.

Prior to the discovery of Lucy’s bones, scientists debated whether bipedalism is a result of larger brains. Bipedalism is a distinct feature separating Homo genus, the closest afarensis relative, and Pan, a chimp species.

However, scientists discovered that Lucy could walk upright although she shared some characteristics with chimps. To date, Lucy is the earliest discovered example of such a primate walking upright.

Reports indicate that Lucy weighed around 60 pounds and was 3 feet 3 inches tall. Lucy had been taken on tour across the United States for five years. Now, the fossil has been returned to Ethiopia where it is being kept in a museum.

Lucy is also called ‘Dinkinesh’ in Ethiopia, the name means ‘you are marvelous’ in the Amharic language.