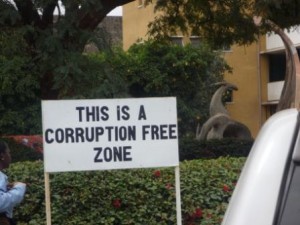 Eleven European Union (EU) diplomats including representatives of Britain, the United States and Japan warned on Thursday that widespread corruption is destroying Kenya’s economic growth and undermining its national security.

“We share the concern of Kenyans at the ongoing problem of corruption,” U.S. ambassador Bob Godec said. “Corruption is undermining Kenya’s future” as it “threatens the country’s economic growth, the provision of government services, and security. It deters investment and costs jobs.”

The diplomats issued the warning when they visited the headquarters of Kenya’s Ethics and Anti-Corruption Commission (EAAC). Senior diplomats from Canada, Finland, Norway, the Netherlands, Switzerland and Sweden were also present at the meeting, which lasted for about two hours.

“People should not be allowed to enjoy the ill-gotten gains of corruption in London, Geneva, New York or anywhere else, and we have a responsibility to ensure that those assets are returned to their rightful owners- the Kenyan people,” said Christian Turner, British High Commissioner to Kenya.

Besides returning stolen assets to Kenya, the statement co-signed by the diplomats also promised to impose travel restrictions on corrupt officials. The ambassadors called for Kenyan officials to investigate every allegation of corruption. They also called for all persons found guilty to be punished according to the law regardless of their status.

Kenya has long been plagued by corruption. However, recent cases of graft in government ministries have exposed the depth of the problem. Kenyans have pressured President Uhuru Kenyatta’s administration to intensify its fight on corruption.

Transparency International ranks Kenya in the bottom section of its annual corruption index – 145th out of 174 countries.

The problem of corruption is widespread and pervades different strata’s of Kenya’s society. A report last month revealed that a government ministry’s budget included sex toys and ball point pens worth $85.

“There is now a general atmosphere where grand theft is normal,” said John Githongo, former Chief of Kenya’s anti-graft body. “There’s a looting spree and clearly there’s no fear of prosecution.”

In September, it was revealed that government officials bought 10 wheelbarrows priced at over $1,000 each. The report led to protests in Kenya’s western Bungoma district.

The report alleged that Kenya’s army has been smuggling sugar and charcoal from Somalia since 2011 when it invaded the war-thorn country to fight Shabab.

“This is not a question of a few corrupt border guards and junior policemen,” the report said. “This is a racket involving large sums of money that stretches to the highest levels within Kenya.”

Reports indicate that proceeds of the illicit trade -estimated to be over $300 million- is shared in three ways between the Kenyan army, Somalia’s regional government (the interim Jubaland Administration) and al-shabab through taxes.

The KDF reportedly earns about $50 million yearly from taxes. And it is estimated that about 230 trucks of sugar are smuggled into Kenya through the port of Kismayo weekly.

The KDF has denied the accusations that it was involved in a smuggling ring which finances al Shabab.