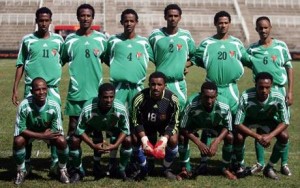 The Botswanan government has asked the United Nations Refugee Agency (UNHCR) to resettle 10 Eritrean football players recently granted political asylum because under the country’s constitution they would have to stay in a refugee camp for at least 10 years.

This is the latest in the saga of the athletes who requested political asylum from the southern African country in October after losing to the host nation in a World Cup qualifying match.

According to Reuters, on Thursday, Botswanan authorities refuted speculations that they were withdrawing asylum from the players. However, officials explained that move to have the players resettled in another country is meant to help them assimilate into a country which has easier refugee laws.

“We are not saying we don’t want them here,” said Augustine Makgonatsotlhe, Botswana’s deputy permanent secretary of the ministry of defense, justice and security.

“They certainly cannot go back to Eritrea and the law here requires a refugee to have stayed here for at least 10 years for them to be integrated into the society. The only option is for the UNHCR to seek an alternative host country.”

The United Nations has accused Eritrea of mass human rights violations. And although the government has denied the accusations, thousands continue to flee yearly. The 10 defecting football players are part of a long list of athletes who have used international sporting events to escape Eritrea.

The Eritrean footballers are currently being held in the Dukwi refugee camp located about 500 km from Gaborone, Botswana’s capital city.

Botswana has not set a deadline for the UNHCR to answer its request to resettle the Eritrean footballers in another country.

Tina Ghelli, South African based UNHCR spokeswoman, said the players had the option to resettle in a third country or willingly repatriate to Eritrea.

According to Reuters, Ghelli said if the players choose to resettle in a third country, it would be based on individual assessments – and if each player meets particular specifications.

Dick Bayford, the lawyer of the players, is yet to comment on the new development.