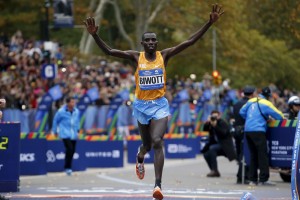 Kenyan athletes continued their dominance of the New York City Marathon with wins in both the men’s and women’s division of the annual race this year.

On Sunday, in the men’s open race, two Kenyan runners took first and second place. Stanley Biwott, 29, won his first major marathon after sprinting away from compatriot Geoffrey Kamworor in the final mile of the 43.195 km race.

Biwott crossed the finish line in Central Park in 2:10:34. “My game plan today was, I run to win the race,” said Biwott, who has struggled to win the New York City Marathon since 2012.

In the past, Biwott has faded toward the end of races. He said his training regimen ensured he had enough endurance to win this event.

“Today it helped me a lot, and I believe the program,” Biwott said about his training regimen.

Kenya’s Wilson Kipsang, the defending champion, came in fourth place. Kipsang, who has won eight of the 13 marathons he has featured in, finished this year’s race in 2:12:45.

The mother of two had finished third twice in a row in 2010 and 2011 before her victory last year. She said her experience was crucial to her win.

“When I made my move… I say OK, let me just go, and if somebody is more strong, she can come and we can go,” Keitany said. “I was ready to go with her, but fortunately they never got to me, so I just crossed the line alone.”

Ethiopia’s Tigist Tufa, winner of the 2015 Virgin Money London Marathon finished in third place. Compatriot, Aselefech Mergia, who was competing in New York for the first time, finished second in 2:25:32 after edging out Tufa in just 1:07.