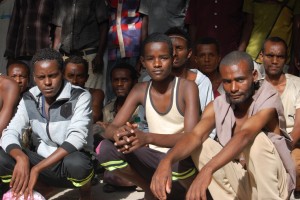 Egyptian authorities have arrested 11 Somalis and ten Ethiopians for entering the country illegally. Egypt is believed to be a transit point for illegal immigrants heading to Europe via the Mediterranean.

According to the Cairo Post, the East African migrants were arrested in a train heading to Luxor in southern Egypt. Officials have not released the identities of the 21 people in custody.

It is also unclear how long the migrants would be detained and if they would be deported back to their home countries.

The Egyptian government has amped up efforts to curb widespread illegal immigration. Thousands of illegal migrants from Eritrea, Ethiopia, Sudan and Western African countries use Egypt as a transit point to get to Europe.

Egyptian, Syrian and Iraqi migrants reportedly also follow this route, which has led thousands to their deaths on the sea as over-crowded boats often sink.

Egyptian authorities have arrested thousands of people for illegal immigration in past two months. Many of the arrests were made around the Egyptian-Libyan borders and in the Mediterranean cities.

On Wednesday, 72 Somalis, three Congolese, two Sudanese and one Gambian citizen were arrested before boarding an illegal boat to Italy. Officials announced later in the day that 240 Egyptians and five Sudanese were arrested in the Western Desert trying to enter Libya illegally.

The illegal migration of African and people from the Middle East to Europe in search of opportunities has escalated over the past few years. European governments have struggled with the mass migrations.

A recent incident where Italian officials found a boat with at least 560 Egyptian children on their shores epitomizes the magnitude of the current illegal immigration situation.

Egypt’s Minster of Immigration and Affairs of Egyptians abroad Nabila Makram confirmed that the children traveled to Europe without their parents or relatives.

She added that the children whose “ages did not exceed 11-years-old” have been received by Italian authorities. The children are reportedly been housed in shelters where they are receiving craft lessons.

According to the Egyptian office of the International Organization for Migration (IOM), in 2014, Italy received 4,000 Egyptian migrants, including 2,000 minors unaccompanied by parents or relatives.