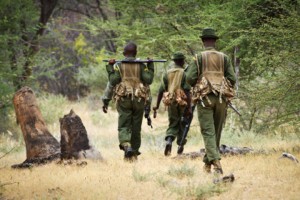 The Associated Press  (NAIROBI) —Corrupt Kenyan wildlife rangers are killing poachers to cover up the officers’ collusion with the criminals slaughtering the country’s elephants, a rights group alleges.

The disappearances of 18 suspected poachers were documented by Muslims for Human Rights over the last three years around Kenya’s Tsavo National Park, a huge wildlife sanctuary that hosted 25,000 elephants in the 1970s but which has only 11,000 today.

Eight of the alleged poachers were last seen in the custody of Kenya Wildlife Service officers. Their bodies were later discovered in forests after being eaten by animals, said Francis Auma, an official with the rights group. Ten others were shot dead by rangers, according to witnesses, said Auma.

Rangers committed the murders to cover up their involvement with the poachers in killing elephants for their ivory, according to the report that interviewed Kenya Wildlife Service rangers whose identities were not revealed.

Muslims for Human Rights is one of Kenya’s most respected human rights groups. They have investigated and exposed human rights abuses by Kenyan authorities against those suspected of supporting Islamic extremist violence.

The Kenya Wildlife Service “officers dealt with these men and helped them with their poaching and in return the poachers would give a share of the profits to the officers,” the report says. “The involved officers kill them to keep their mouths shut. They are usually afraid the poachers would inform on them.”

In other incidents, the officers would put poachers in touch with an interested ivory buyer but then kill the poachers and pocket the payment, said the report, which The Associated Press obtained before its public release next week.

Poachers in Kenya can earn several hundred dollars for two average-sized elephant tusks. This can be tempting to some wildlife rangers unhappy about low pay, said the government report. A beginning ranger earns $140 a month while the highest-paid earns $295 a month.

A Kenya Wildlife Service spokesman declined to comment on the allegations, saying the agency would respond once it had officially received the report.

“The security report confirms what we have been warning for some time, that systems at KWS have broken down and the absence of leadership is the greatest threat to wildlife,” said Paula Kahumbu, the chief executive of the group Wildlife Direct.

Poaching deaths of elephants to meet demand for ivory in China is an escalating crisis across Africa. A report last week by Africa’s leading elephant experts, including Save the Elephants, estimated that poachers killed 100,000 elephants between 2010 and 2012 on the continent.

Richard Leakey, a famed scientist and founding chairman of the Kenya Wildlife Service, said he believes extrajudicial killings take place by KWS “from time to time.”

He noted that most poachers around Tsavo are Muslim, often of Somali origin, and that some in KWS could be anti-Somali because of attacks in Kenya by Somali militants from Al Shabab.

“Sadly the extrajudicial killing is all too common in Kenya in the uniformed services,” Leakey told The Associated Press in an email.

The Muslims for Human Rights report said no investigations have been launched into the 18 killings and disappearances because families are afraid to make formal complaints with the police.