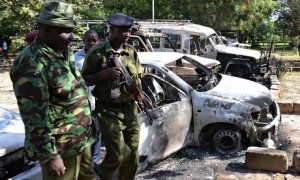 About 20 people have been killed during an attack on two villages in Lamu County on Monday night.

The raid on Poromoko and Mapenya came about 24-hours after a headline-grabbing attack on Mpeketoni in the same county; which claimed up to 49 lives.

Reports indicate that the terrorists jammed telephone lines in the district before attacking to prevent victims from calling for help.

Kenya’s Red Cross has revealed that about 50 people have been reported missing in the aftermath of the attacks in Lamu over the past two days. There are unconfirmed reports that some of the abducted people are women.

Several properties in the villages are also reported to have been set ablaze.

The attack on the county, which is located close to the border with Somalia, is the latest in a wave of deadly attacks Kenya has suffered this year.

On Monday, al Shabab claimed responsibility for the attack in a statement released to the press.

The group says the attacks are in retaliation for Kenya’s military presence in Somalia and the mistreatment of Somali nationals during the ongoing exercise to expel illegal immigrants from the country.

The statement notes that “We hereby warn the Kenyan government and its public that as long as you continue to invade our lands and oppress innocent Muslims, such attacks will continue and the prospect of peace and stability in Kenya will be but a distant mirage.”

The statement also warns tourists to stay away from Kenya or suffer the consequences.

A spokesman for the terrorists, Abdulaziz Abu Musab, has disclosed to AFP that the casualties from the latest attack were mostly police and Kenyan Wildlife officers. He went on to reveal that the commandos, who carried out the attack, have been seeking out military officers in other locations in the region to engage in combat.

Meanwhile, in a controversial speech on Tuesday, President Uhuru Kenyatta has dismissed al Shabab’s statement accepting responsibility for the attack, instead, he blamed it on local politicians.

According to President Kenyatta, “Evidence indicates local political networks were involved in the planning and execution of the heinous crime.”

He, however, warned that the attack plays into the plans of other criminal gangs.

Some pundits have also noted that the attacks could be motivated by the deep-seated ethnic division in the country.

Local sources say over the past decade, many Kikuyu people have moved to the area, which is largely populated by the Oromo and other ethnic groups from Somalia.

This analysis of the situation is consistent with al Shabab’s recent comments that Mpeketoni was originally populated by Muslims before it was invaded and occupied by Christians.

Kenya’s history is rife with instances of violent confrontations between rival ethnic groups.

Meanwhile, back in Lamu County, local sources say despite the heavy security presence, there is still tension among locals stemming from fears that the terrorists could strike anywhere next time.

Reports indicate that some police officers have been fired and are set to be arraigned in court for allegedly failing to act on intelligence reports of an impending terrorist attack in the region.