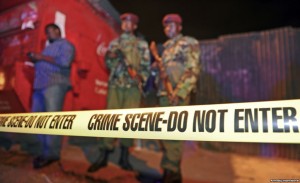 Four people have been killed and many others injured after a car bomb went off outside the premises of the Pangani Police Station on Wednesday night.

Reports indicate that two police officers are among the casualties.

According to the Inspector General of Police, David Kimaiyo, the two officers stopped the suspicious-looking car at a nearby checkpoint because it was reportedly driving on the wrong lane.

They then boarded the Toyota NZE vehicle and were leading the occupants to the station for questioning when the blast occurred.

Although several reports have noted that the powerful explosion severely mangled the car, the IGP has told the media that investigators have been able to uncover some leads about the identities of the terrorists from documents found in the vehicle.

He has also revealed that the blast was caused by an improvised explosive device.

Pangani is located north of Eastleigh, where Kenyan security agencies have embarked on an operation to eliminate illegal immigrants since the beginning of this month.

Some commentators have expressed worries over reprisal attacks on Somalis in Kenya and an increase in the mistreatment of suspected terrorists by security agents.

While paying tribute to the two late officers, whom he described as ‘gallant’, the IGP assured the country that the police will not relent in their efforts to curb terrorism.

“We can’t be cowed by such heinous acts and I fully declare war,” he tweeted.

Several pundits are already accusing Kenya’s security agencies of arbitrarily and illegally targeting people based on their ethnicity and religion since the exercise codenamed ‘Uslama Watch’ began earlier this month.

Recently, Nairobi Police Chief, Benson Kibue, told the media that the operation is set to be extended to other neighbourhoods of the capital. He further contended that crime has been drastically reduced in Nairobi.

“During this Easter Holiday celebrations, things have been very okay. Nothing was registered in as far as robberies, muggings or any other crimes. There have been no criminal activities during this period of time,” he stated.

Reports indicate that the operation, which has thus far been centred in Eastleigh and South ‘C’, has led to the apprehension of over 3,000 people and the deportation of more than 200 others.

Meanwhile, it is still unclear where the terrorists were headed with the bomb-strapped vehicle before the explosion last night.

On Thursday, President Uhuru Kenyatta commended the two late soldiers who inadvertently gave their lives to protect many others.

He, however, dismissed allegations that the ‘Uslama Watch’ operation is rooted in xenophobia, adding that the government is determined to fight crime and welcomes the collaboration of the populace to meet this end.