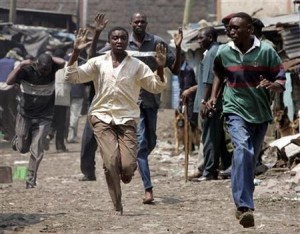 Kenya Human Rights Commission (KHRC) and the International Federation for Human Rights (FIDH) have accused the jubilee government of failing to live up to its campaign promises regarding the rights of citizens.

In a 28-page report, the groups detail several events in the past year to highlight instances where the state has failed to intervene to stop abuses and sometimes perpetuated these rampant and flagrant violations of the fundamental human rights of Kenyans.

The report notes that “Democratic principles and the rule of law have been regularly violated under the new regime: freedom of association and freedom of peaceful assembly have been constantly under threat, freedom of expression and of the press have been seriously infringed and fundamental rights of non-discrimination have been jeopardized in various ways.”

It goes on to point out the government’s use of restrictive legislation and violent crackdowns to curb the activities of dissenters and human rights activists. It further underscores the fact that anti-terrorism operations have “been marred by serious human rights abuses.”

Although the report commends some improvements in the country’s property rights, it also accuses the authorities of discrimination and perpetuating the concept of inequality before the law.

The report also charges the government of failing to secure justice for victims of the 2007/08 post election violence. It notes that the decision to amend the Truth, Justice and Reconciliation Act of 2008 to allow legislators make changes to the Truth, Justice and Reconciliation Commission’s report reflects the lack of political will to secure justice for the victims.

The report further criticizes the government’s recent row with the International Criminal Court (ICC) as indicative of an “unwillingness to provide and secure justice for victims of post-election violence.”

Karim Lahidji, the President of FIDH is quoted saying “Instead of fulfilling their obligation to ensure that victims of post-election violence get justice and redress, Uhuru Kenyatta and William Ruto have spent their entire first year in office actively undermining these non-derogeable rights.”

Meanwhile, the Executive Director of KHRC, Atsango Chesoni has noted that these violations of “constitutional human rights must stop if Kenya is to truly follow the path of democracy and the rule of law.”