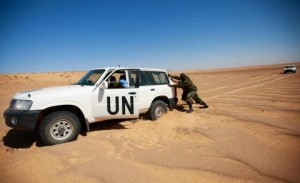 Three unidentified gunmen attacked and made away with a United Nations vehicle from the Hagadera refugee camp, south-eastern Somalia, on Wednesday morning.

Fafi District Commissioner, Geoffrey Taragon, told the press that the driver of the Nissan patrol vehicle was shot during the hijacking, which occurred at about 8:30 a.m.

Commentators on social media have noted that there were other passengers in the car.

However, the United Nations High Commissioner for Refugees (UNHCR) Deputy Director to Kenya, Abel Mbilinyi, has revealed that “no one is missing.”

He further disclosed that the injured driver has been flown to Nairobi for medical care and that the vehicle has been recovered “about 40 kilometres from the place of the attack,” reportedly in Somali territory.

Although al Shabab is yet to claim responsibility for the attack, various commentators have pointed accusing fingers at the group.

Recently the Islamic extremists have increased the rate of their attacks and have sought high profile targets.

The federal parliament has, meanwhile, condemned the national intelligence agency for failing to prevent the assassination of two legislators earlier this week.