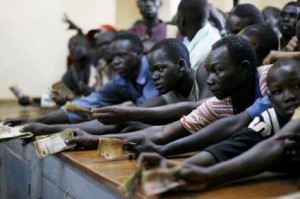 The Central Bank of Egypt has ordered all banks in the country to freeze their dealings with Sudanese banks over concerns that these institutions may be violating international financial laws.

According to Sudan Tribune, the ban stems from fears that financial institutions from these countries are involved in money laundering and are also being used to finance terrorism and illegal activities in Egypt.

Earlier in the year, some Asian, Middle Eastern and European banks also shut down their operations in Sudan for similar reasons.

But the Central Bank of Sudan downplayed the move, explaining that “The decision is related to internal procedures within the framework of institutional control at those banks. This is normal in the field of banking that experiences continuous changes. Associates enter, and others exit.”

Top officials from the Sudanese central bank have expressed concerns over the country’s compliance with the standards of the Financial Action Task Force in the past.

Meanwhile, boxed in by numerous sanctions, the Central Bank of Sudan is struggling with a shortage of hard-currency.