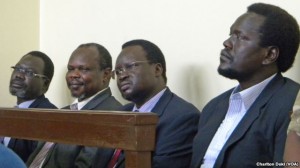 Two prosecution witnesses in the ongoing trial against 4 members of the Sudan People’s Liberation Movement (SPLM) have told the court that the politicians were not directly involved in the alleged coup d’état in December last year.

According to a report by the VOA, Army Brigadier Atem Benjamin and Major General Mach Paul Kuol Awar – the director of the country’s military intelligence division – could not provide any evidence linking the 4 politicians (Pagan Amum, Oyay Deng Ajak, Ezekiel Lol Gatkouth and Majak D’Agoot) with the three-month long insurrection in their testimonies.

However, evidence was presented connecting Riek Machar and Taban Deng – both currently on the run – with the rebellion, which has led to the deaths of over 10,000 people and the displacement of almost 1 million others.

Major General Kuol reportedly disclosed to the special court that the revolt was ignited by members of the Tiger unit, who resolved to vent their frustrations violently.

Commentators have since questioned the turn of the treason trial, especially after the prosecution had said there was solid evidence linking the four men to the rebellion.

Meanwhile, others have connected the latest revelations with the comments of Riek Machar that the outburst of violence is not the result of a coup attempt, but a resistance against the country’s leadership.

The ongoing trial has been criticized by several groups and individuals, including by officials of the Inter-governmental Authority for Development (IGAD) – the agency in charge of the peace talks between the warring groups in the world’s youngest nation.

Discussions between the both factions of the divide resumed in Addis Ababa, on Tuesday, March 25th, after a short break. Reports indicate that the two sides continue to dispute over the preconditions for their deliberations.

Since seceding from Sudan in 2011, the South Sudanese government has struggled to build the country amid reportedly high levels of corruption and nepotism as well as lack of infrastructure and skilled professionals. Pundits have noted that the uprising is symptomatic for the deep division in the country.

Photo by the VOA: The four accused men in court.