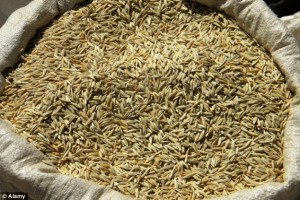 A few years ago, discussions about Ethiopia usually revolved around the country’s precarious food security and its poor economy.

Now things are starting to change, Ethiopia is increasingly becoming synonymous with teff; a highly nutritious, gluten free “super food,” which is quickly finding its way to consumers in the western hemisphere.

Rich in calcium, iron and protein, teff is also reported to have a balanced collection of amino acids. The grain is reportedly easy to substitute for wheat flour in anything from pasta, bread and waffles to pizza bases.

Many experts have noted that the ancient grain has the potential to attract huge investment into Ethiopia’s agricultural sector.

However, the Ethiopian government is reluctant to permit the export of teff over fears that this will lead to an inflation of the price of the grain locally.

According to Reuters, the price of the grain is currently quite steep and this has fueled concerns that increased external demands will cause the prices to rocket, making it hard for small dealers and consumers to obtain the grain.

Meanwhile, reports indicate that production of the teff has increased following the introduction 19 varieties of the grain, with farmers reportedly more eager to sell.