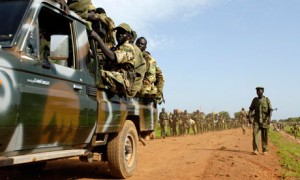 The defense ministers of Sudan and South Sudan on Wednesday agreed to resume joint patrol of their disputed 6-mile long border.

According to a report by Daily Nation, the South Sudanese Defense Minister, Kuol Manyang, who was in Khartoum this week, disclosed that the plan to demilitarize and secure the region is part of an agreement between both nations to create a buffer zone and re-open the border for traders.

Sudan and its young southern neighbor have been engaged in a wild and prolonged battle over the oil-rich region – approximately spanning from Unity state to South Kordofan.

Prior to the formal secession of South Sudan from Sudan in 2011, both nations fought a short war over Abyei.

In June 2011, the United Nations intervened and got both sides to sign a deal that called for the demilitarization of the region and for plans to be made for an administration and local security to be created for the Abyei area.

Plans to put this agreement into effects has been met with numerous challenges as both nations trade accusations of sponsoring rebels in the other’s territory.

Both nations were once again engaged in a battle over the disputed territory between March and April 2012, which led to a temporary halt in the flow of oil from fields in the south through Sudan.

However, after negotiations in Addis Ababa, both countries agreed to create a buffer zone and implement other arrangements in their June 2011 deal.

Reports indicate that plans to secure the region coursed on smoothly until the South Sudanese government began withdrawing the country’s forces from the region late last year after accusing Sudan of violating their agreement.

The South Sudanese defense minister explained the importance of the move to resume joint patrol of the border.

“This is the key to the relation between South Sudan and Sudan, because security is everything. If there is security then development, trade, economic, social and political relations will thrive,” he said.

Abyei remains a sticky point in the agreement between Sudan and South Sudan.

This past week the United Nations Security Council ordered both nations to withdraw police and other forces from Abyei and other areas in the disputed region after the council was briefed by the head of the United Nations Office to the African Union (UNOAU), Haile Menkerios and the UN’s Under-Secretary General for Peacekeeping Operations, Herve Ladsous.

The council underscored the fact that the armed groups represent a threat to peace in the region and violates the demilitarization agreement between the two nations.

The council also directed the two nations to resume negotiations and proceed with the implementation of the June 2011 agreement on improving security and establishing an administrative structure in the region.

The war in South Sudan has largely eclipsed the conflict between the neighbors, who both share one name.

Attacks on oil rich states in South Sudan during the insurrection have reportedly prompted Sudanese officials to offer to provide a unit of soldiers to guard its neighbors’ oil fields. However, the southern government has not agreed to this, but has rather requested technicians from Sudan.

Although the Sudanese government has been accused of supporting Riek Machar and his rebellion, officials have denied involvement in the ongoing war.