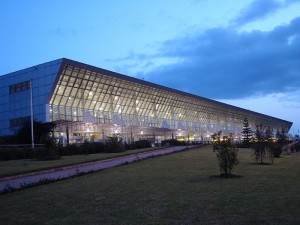 The Addis Ababa and Oromia Integrated Development Plan Project Office has drafted a plan for a grand airport to be built on the western outskirts of Addis Ababa in the Oromia special zone.

Reports indicate that the airport forms part of a new metropolitan capital master plan that includes the relocation of the Bole International Airport, one of the major hubs on the continent.

Fetuma Lemessa, Deputy Manager of the Addis Ababa and The Surrounding Oromia Integrated Development Plan Project Office, told Capital FM that Teji, about 30km west of Addis Ababa on the road to Jimma, is the proposed site for the location of the new airport.

The project office had been working on refining the new master plan for the past year, reports indicate.

The proposed plan, which work will commence on in a year, replaces the ten-year old master plan for Addis Ababa and incorporates several new details.

Reports indicate that the growth in air traffic at the Addis Ababa Bole International Airport prompted the Ethiopian Airport Enterprise to plan on building a new international airport between the towns of Mojo and Meki on the road to Hawassa, about 90km southeast of Addis.

The Ethiopian Airport Enterprise had reportedly been conducting a study on the establishment of a new international airport for some time.

When the major expansion project at the Addis Ababa Bole International Airport was drafted in the early 1990s, it was assumed that the airport would adequately accommodate air traffic easily up until 2017. However, the airport reached its maximum capacity in 2010, hence, the need to venture into the construction of a new international airport.

According to the master plan, the new airport’s location was favored for several reasons, including the fact that it is relatively close to the capital than the original planned location.

Officials have disclosed that the Addis Ababa Bole International Airport will be used for regional and domestic flights, VIP flights and other general aviation services. “The new airport is expected to accommodate long-haul international flights,” he said.

According to information obtained from the Public Relations Department of Ethiopian Airlines, Addis Ababa Bole International Airport currently accommodates an average of 800 departures per week.

The capacity of Ethiopian Airlines is also growing swiftly in terms of the number of airplanes and destinations. The national flag carrier currently operates 58 airplanes providing services to 72 destinations, of which 45 are in Africa.