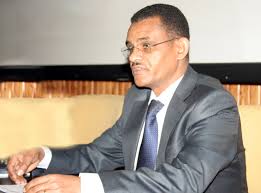 The former chairperson of the Oromo Peoples’ Democratic Organisation (OPDO) and former president of the Oromia Region, Alemayehu Atomsa, passed away late on Thursday, March 6th, 2014.

He was born in 1969 in the Bilo Boshe woreda of East Wollega – one of the 17 zones in the Oromia Region.

Alemayehu was an obscure figure, formerly with the EPRDF’s propaganda office and with little connection to the OPDO’s rank and file prior to his appointment as president of Ethiopia’s largest state – The Oromia Regional State.

Alemayehu has been replaced by Muktar Kedir, Minister of the Civil Service & Good Governance Reform Cluster, in both posts as Chairperson of the OPDO and President of the Oromia Region.

Alemayehu was reportedly absent from office for a prolonged period due to his illness.

On February 18th, 2014, the OPDO disclosed that it had accepted his request to step-down from his presidency due to health related issues.

The Chinese-educated President had not previously received the consent of his Party to step down, although he had tendered his resignation on several occasions.

Alemayehu is reported to have fallen ill within months of his appointment and had been rarely able to conduct his duties, while frequently travelling abroad for medical care.

Alemayehu was pronounced dead at 1 am on Thursday at the age of 45, after receiving medical treatment in Bangkok, Thailand.

He was a father of two daughters and a son.

It has been less than two weeks since he resigned from his post.