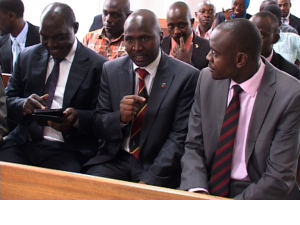 The Ugandan Supreme Court on Thursday overturned the decision of the nation’s Constitutional Court to expel four ex-National Resistance Movement (NRM) elected Members of Parliament, and has also issued an injunction against the Electoral Commission (EC) from furthering electoral plans to replace the officials.

The Court’s decision upheld the argument of their representatives, Peter Mukidi Walubiri and Caleb Alaka, who proposed that their client’s rights would be violated if last month’s ruling of the Constitutional Court to depose them is effected while their case is ongoing.

“The MPs were aggrieved with the judgment of the Constitutional court; if the Electoral Commission goes ahead to organise the elections, then their right of appeal would have been violated,” they contended.

The Court dismissed the argument of the leading party’s legal team that the decision of the Constitutional Court had already been implemented, and has ruled to have the officials return to duty until it delivers its final ruling on March 28th.

The NRM has accused the speaker of parliament, Rebecca Kadaga, of stalling to order the expulsion of the rebel MP’s from the nation’s legislative body.

Last month, the Supreme Court ruled that the four MP’s were in parliament illegally, since they had been kicked out of their party and cannot constitutionally claim to be independent candidates now.

The Court also directed the Electoral Commission to begin preparations for elections to replace the four MP’s as well as the Lord Mayor of Kampala, Erias Lukwago, who has been impeached under controversial circumstances for alleged abuse of office.

Earlier today, the Chairman of the Electoral Commission, Eng. Dr. Badru Kiggundu, revealed that preparations have been completed for the impending elections, scheduled for April 17th.

It is currently unclear how the Supreme Court’s ruling will affect the electoral body’s voters registration plans and other pre-election processes.

In the aftermath of the Supreme Court’s ruling today, reports indicate violent clashes occurred between police and jubilant supporters of the four Members of Parliament, who had organized seemingly impromptu rally to celebrate their victory in court.