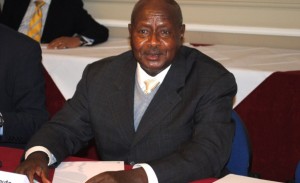 The bill, which was approved by parliament in December 2013, places extended jail term of up to 14 years for first-time offenders and life imprisonment for what has been described as “aggravated homosexuality.”

President Musuveni signed the bill in the face of a great current of opposition voices against the controversial law.

The governments of the United States, Britain and European Union leaders have all criticized the bill, which has been described as draconian.

Several pundits speculate that the government of Uganda risks losing aid and other support from its international partners because of this move.

But President Musuveni has described the attempts to influence his decision on the bill as “social imperialism.”

“We Africans never seek to impose our view on others. If only they could let us alone,” he said at the signing of the bill in his residence earlier today.

President Musuveni commissioned a study to discover if homosexuality is hereditary or an acquired trait before he signed this bill, according to reports.

While Ugandan scientists have relayed that their research results prove the trait is acquired. Reports indicate a United States group have sent a report to the Ugandan president to support claims that homosexuality is hereditary.

According to Bishop Desmond Tutu of South Africa, “there is no scientific justification for prejudice and discrimination.”

He compared the criminalising of homosexuality in Uganda and the occasional mob assault on suspected homosexuals to the social situation in Nazi Germany and Apartheid South Africa.

But presidential spokesman, Tamale Mirundi, has told AFP that President Musuveni will not be “pushed by the international lobby groups.”

“He has made it clear whatever he does will be in the interests of Uganda and not foreign interests,” Mirundi adds.

Meanwhile, critics have accused President Musuveni of capitalizing on the widespread debate around the bill to increase his popularity as his party moves to select a presidential candidate.

Uganda is quickly emerging as one of the most conservative nations in the region. The country has also enacted laws against pornography as well as suggestive videos. Reports indicate the laws have effectively set a dress code for television personalities in Uganda.

Homosexuality is currently outlawed in about 38 countries in Africa.