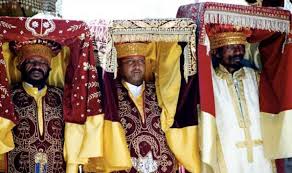 Orthodox Christians in Ethiopia have marked one of the most important events on the Christian calendar on Sunday, January 19th.

Timket (also Timkat, or Timqat) is the Ethiopian Orthodox celebration of Epiphany. It is usually celebrated on January 19th (or 20th on a Leap Year), corresponding to the 11th day of Terr on the Ethiopian calendar.

Timket particularly celebrates the baptism of the Christian savior, Jesus, in the Jordan River.

This festival is perhaps best known for its ritual re-enactment of baptism. Early European visitors had confused the activities associated with Timket with the actual sacrament of baptism.

As a result, the Timket’s rituals were erroneously cited as example of an alleged religious error, since traditional Christians believe in “one baptism for the remission of sins.”

During the Timket, the Tabot, a prototype of the Ark of the Covenant, is carefully covered in rich cloth and borne in procession on the head of the priest.

This is a truly rare occasion for many Ethiopians to catch a glimpse of the Tabot, which reportedly symbolizes the Christian Messiah when he came to the Jordan for baptism.

The Timket’s celebrations begin at about 2.a.m. with the Divine Liturgy near a stream or pool.

At dawn, the body of water is blessed and sprinkled on the adherents gathered. Many then proceed to immerse themselves in the water, in a process that is believed to be a renewal of their baptismal vows.

By noon on Timket Day, a large crowd usually assembles at the ritual site, those who went home for a little rest having returned, and the holy ark is escorted back to the church in a colorful procession.

The clergy, draped in colorful robes and umbrellas, perform religious dances and songs; the elders march solemnly with their weapons, attended by middle-aged men singing a long-drawn, low-pitched haaa hooo; and the children run about with sticks and games.

Dressed up in their finest, women usually chatter excitedly on their one free day in the year.

While young men usually engage in continuous dance and singing sessions, until the ark has been returned and everyone departs to their respective homes.