By Will Davison | Bloomberg News 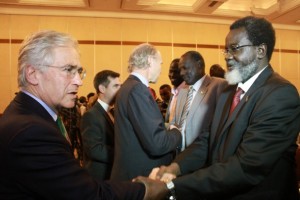 Sheraton Addis, the palatial Ethiopian hotel that is hosting talks on the conflict in South Sudan, feels somewhat like an oasis.

Nestled beneath the sprawling residence of Ethiopia’s prime minister and near Emperor HaileSelassie’s Jubilee Palace, it monopolizes a neighborhood in the heart of Addis Ababa, a capital city experiencing a dizzying spurt of growth.

With rooms at the “Luxury Collection Hotel” owned by Ethiopian-Saudi billionaire Mohamed al-Amoudi running more than $300 a night, the luxury setting seems apart from much of a country with an average earnings of $380, according to the World Bank. Government and rebel leaders can be seen mingling among elites and jet-setters alongside fountains and palm trees.

Yet after a third week of talks, no progress has been made despite efforts by regional mediators and a coterie of diplomats and advisers – and despite ongoing bloody battles in South Sudan and an unfolding humanitarian disaster. Absent from Addis is South Sudan rebel leader, former vice-president Riek Machar, who has led the rebellion from the bush. since mid-December after leaving the capital Juba.

One key demand to moving on talks is a rebel demand that 11 senior ruling-party figures detained in mid-December on allegations of coup-plotting are released. If this is resolved, an initial “cessation of hostilities” can be signed. This week, a public acknowledgment of intervention by Uganda on the side of South Sudan president Salva Kiir’s government has further muddied the waters; rebels want the foreign troops withdrawn.

An element of farce came last Monday amid clashing agendas and empty progress when a previously scheduled visit by Japanese prime minister Shinzo Abe and his delegation – who were booked into the Sheraton Addis – took place.

The venue for the peace process had to temporarily decamp into a basement disco called Gaslight. The talks continued at a table set up on the dance floor, but the subsequent discussion lasted only 30 minutes.

To be sure, Addis Ababa itself is not necessarily a surprise choice for the talks, since it is the home of the African Union and it played a prominent role in South Sudan’s secession from Sudan.

At the outset of the talks, mediators from the Intergovernmental Authority on Development – a bloc of eight East African nations known as IGAD – had to work out who belonged at the table. Setting rules of conduct, procedures, and an agenda took more than a week.

So far, President Kiir has refused calls from the rebels and the international community to release the 11 detainees. “We’re keeping the seats warm for them”, explains one opposition delegate about the expected presence of the jailed leaders for the next phase of negotiations.

Those talks would focus on the details of a firmer “monitored ceasefire” and a political chinwag to try and patch-up the murderous political rivalries that have plunged the country into chaos.

Talks were paid for at first by IGAD. But the organization’s Western partners say they will pick up the bulk of the bill. On Friday the European Union announced it would be giving $1.5 million for the “mediation process.”

Donor envoys dot the Sheraton’s Fountain Court, along with journalists who wait for tidbits of often-inconsequential information.

Amid the burble of gossip intermingling with the hypnotic tones of hotel music wafting through the lobby, a concern builds: There may well be no breakthrough in Addis Ababa as long as commanders on the ground in South Sudan keep seeking leverage by military action on the ground.

The talks are “stuck,” says one diplomat. He bemoans the absence of any South Sudan leaders from any side offering a peaceful vision for their country. They only seem interested in blaming each other, he says.

After hugging old friends from the rebel group as they enjoyed club sandwiches on the terrace, one exasperated diplomat hurls invective and expletives at all of South Sudan’s leaders, saying, “The damage is done” and is due to a failure of “collective leadership.”